The end of World War II signaled the beginning of America’s great modern suburbanization. As Americans flocked to places like Levittown and similar bedroom communities, they demanded not only modern technology such as washing machines, but also clean and open green spaces to enjoy increasing leisure time. They wanted to recreate, and began to insist that public dollars be used for acquiring and cleaning up the most treasured areas in their own communities. 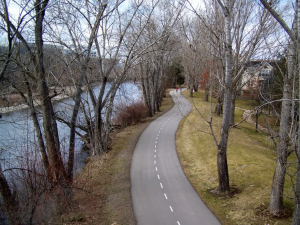 Today many major cities in the United States have recreationally focused greenbelts or greenways. But no western city started out with such amenities, since urban rivers were more often the site of pollution disposal. Today, these natural areas provide wildlife habitat, improve air quality, add to a city’s aesthetic value, and offer recreational opportunities.

In Boise, citizens wanted to use the river recreationally starting in the 1950s but industrial waste and other debris made the prospect unpleasant and unsafe.  The idea for a greenbelt came along in the early 1960s when city officials hired California planning consultants Atkinson & Associates to prepare a 20-year plan to revise land use and upgrade the local zoning ordinances. The firm recommended that Boise buy up parcels along the river front to create a linear park system. 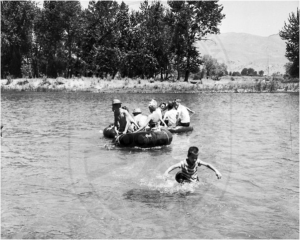 In 1963 Bill Onweiler ran for Boise City Council. He lost, but learned in the course of his campaign about the public’s growing interest in parks and bike paths. Onweiler used the knowledge for a second (and successful) run for Council in 1965, when his campaign focused on his support for parks and city beautification. Once a City Council member, he became liaison to the Parks and Recreation and Planning Departments. Onweiler provided major vision for the Greenbelt and convinced his fellow Council members to adopt the Greenbelt plan on January 24, 1966. But adopting the plan was only the start. The City needed to find the money to purchase lands.

To drum up local support, Onweiler made a film to promote the idea of the Boise Greenbelt. He recruited Boise Airport Manager Don Duvall and Channel 2 reporter Garth Andrews to assist in gathering footage all along the river. Donations came from private citizens as well as corporations. Onweiler and fellow Councilman Sherm Perry traveled to Washington D.C. to meet with Senators Frank Church and Len Jordon and secured additional project funding from the Land and Water Conservation Fund.

As the Greenbelt project developed, the City acquired 17 riverfront tracts that totaled 72 acres. Together with Ada County, the City developed the Greenbelt in cooperation with individuals, civic groups, and corporations. In 1986, the Idaho Foundation for Parks and Lands conveyed approximately 34 acres to Ada County, which enabled the extension of the Boise Greenbelt to the Sandy Point Unit of Lucky Peak State Park. Today the Boise Greenbelt includes 25 miles of trails, the majority of which is paved and striped to accommodate walking, running, bicycling and roller-blading. It offers access for rafting and fishing and travels through some of the city’s major parks and through the campus of Boise State University.

Residents and tourists alike can relax, exercise, or view wildlife along the Greenbelt, particularly along the Idaho Birding Trail, the Bethine Church River Trail, and at the Morrison Knudsen Nature Center. If you’re planning a visit to Boise this summer, the city offers maps and information on parking, trail usage, activities, and construction updates.

Editor’s note:  The photos were previously sourced from the internet; the photo credits are unknown.  If one of these photos is yours, contact us so that we can credit you appropriately.