7/10/12: Historical Research and the Importance of Cursive Writing

Historical research often bears a resemblance to detective work. Following clues, gathering evidence and piecing together sources can lead to a triumphant “aha!” moment when a key question is answered or can gradually construct a large historical narrative for the topic at hand. Investigating a historic question can mean reading books, searching for original documents, studying maps, finding photos and looking everywhere from the internet to faraway archives. Today’s historians enjoy the convenience of email, digital scanning, and other technologies to aid in their research but sometimes they still rely on skills they learned in elementary school – like how to read cursive handwriting.

When it comes to researching land and water issues Survey Plats and Field Notes from the General Land Office records are valuable tools in finding details about historic land use and geographical features. 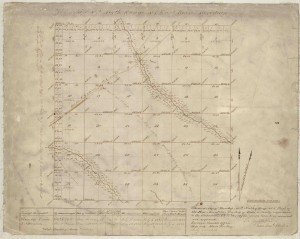 Example of a Plat Map from 1875
(Click image to see a larger version.)

Survey plats and field notes reflect the work done in cadastral surveys. The English word “cadastre” (the original meaning which is “down the line”) reflects the surveyors’ method of following boundary lines and giving descriptions of the features they encountered. The Land Ordinance of 1785 laid the groundwork for the Public Land Survey System (also called the rectangular survey system). This method mapped out much of America by establishing square units known as townships measuring six miles on each side. The townships were then divided into thirty-six sections, each a square mile. Containing 640 acres, these sections could then be subdivided into still-smaller parcels.

The United States General Land Office, created in 1812, managed the surveying of the American West, which at the time included many of the states we now consider part of the Midwest. Surveyors took note of soil conditions, vegetation, watercourses, canyons and man-made features like wagon roads. Surveyors and their assistants measured the landscape with lengths of chains that they carried, denoting everything by how many chains or, for narrower features, how many individual chain-links it measured. They explored the perimeter of every township and also travelled the interior boundaries that divided the township in thirty-six sections. The survey plats (maps) show the township’s features and the accompanying field notes provide a narrative description of the landscape.

While they are accessible online and generally in good condition, these records can be difficult to decipher. 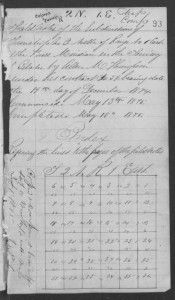 In addition to using a unique measurement method, the surveyors wrote in cursive. Even for historians who read and write modern cursive, mid-19th century handwriting can provide an interesting challenge. But what will this mean for the next generation of researchers? The majority of American schools have moved away from some of the traditional curriculum elements such as cursive handwriting. 45 states have adopted the Common Core State Standards curriculum which has received both praise and criticism for not including cursive handwriting as part of elementary school coursework. Proponents of cursive insist that it teaches students discipline and brings an artistic element to the writing and learning process. 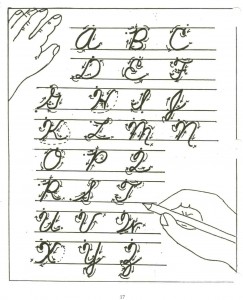 Other argue that in a digital age, schools can’t afford to devote lesson time to a style of handwriting many students will rarely use. Modern classrooms and lifestyles support a move toward keyboarding, but tomorrow’s historians will need experience with cursive if they hope to solve some of the mysteries they’ll want to decipher.

Editor’s Note:  While this post was being drafted, New Yorker staff writer and noted biographer Judith Thurman posted her thoughts on the decline of teaching cursive writing on the New Yorker website.  For her perspective on this issue, see Ms. Thurman’s piece here.