As Idaho, Colorado, and other western states suffer through another season of wildfires that claim lives and homes and pollute the summer air, we remember our region’s long history of forest fires and the evolution of the U. S. Forest Service’s approach to them over the past 100 years. Author and journalist Timothy Egan has written the definitive story of the catastrophic 1910 Big Burn in his 2009 book The Big Burn: Teddy Roosevelt and the Fire that Saved America, and we wanted to do a brief sketch of the story for our readers. 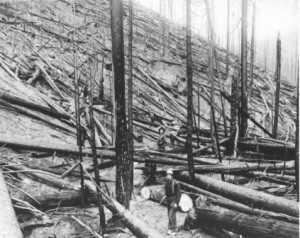 In late summer 1910, northern Idaho and western Montana experienced what came to be known as the Great 1910 Fires. While many fires blazed during that hot, dry summer, most notable was the “Big Blowup” of August 20-21 that began as a series of smaller fires started by lightning strikes. Those fires merged to form the largest forest fire in American history, which burned eight billion board feet of timber, claimed over 80 lives, and damaged watersheds across three million acres. The fire claimed over a third of the town of Wallace, Idaho. The Idaho towns of Mullen and Avery survived because citizens set “backburns” – fires ignited deliberately – to destroy the fuel ahead of the approaching wildfire. The Forest Service, established in 1905, had just axes and shovels for fire-fighting equipment. Personnel in the fledgling agency had little training or experience with wildfires and their access to remote areas of the forests consisted chiefly of animal trails or rough, narrow routes established by Native Americans and early miners.

As smoke and ash drifted east to Denver, many lives were lost in the fight. Most who perished were fire fighters, including ten who died at Big Creek in the Coeur d’Alene Forest. Seven more fire fighters succumbed when they took refuge in a prospect hole, while a falling pine tree killed three others. Another crew who followed Big Creek up to West Fork and pitched camp found themselves surrounded on three sides by the fire after the wind shifted. Eighteen men from that crew sought refuge in a nearby cabin and did not survive. At Setzer Creek, a crew of seventy men was ordered to travel to the town of Avery. Most of the men obeyed, but twenty-eight stayed behind on the creek, and all of them were killed. Early Forest Service ranger Edward Pulaski saved 39 of his 45-person crew by ordering them into an abandoned mine tunnel near Wallace.

The 1910 fires inspired new efforts and policies for combating future events. In the immediate aftermath of the 1910 forest fires, U.S. Congress passed the Weeks Act, aimed at allowing cooperative fire control between state and federal government. The Forest Service developed new methods of fire control gleaned from its recent experiences. They established mountaintop lookouts with telephone lines which permitted early reporting of fires, and built trail systems which allowed for better firefighting capacity in remote areas. Within a decade, the agency convinced the public that it could somehow prevent similar events elsewhere. In fact, the designation of a portion of Idaho’s Payette National Forest known then as the Thunder Mountain addition can be traced in part to a fire that burned out of control in that region in 1919. Following the summer inferno in which the federal General Land Office could not find enough able-bodied men to fight the blaze, local residents pleaded with the federal government to add the area to the already-existing National Forest which surrounded it on all sides, claiming that mere addition to the federal reservation would help prevent future forest fires. Of course, a human designation such as this cannot trump the randomness of lightning storms or human carelessness, but the area was added to the Forest nonetheless. 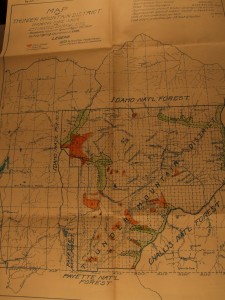 Today, scientists recognize fire as a positive and normal part of a forest’s lifecycle because of its impact on regeneration and regrowth. Despite their impact on human and animal populations, forest fires contribute to soil productivity, recycling nutrients by adding woody debris to the soil. Many decades of preventing and putting out fires has led to overgrowth in many areas that now need thinning so that when the inevitable fire strikes, it is not fueled by excess growth. Today, some fires are allowed to burn until they go out naturally, such as the one that is currently burning in the Frank Church Wilderness. Allowing fires to burn reduces excess fuel for future fires and contributes to regeneration and regrowth.

As the fires continue to burn across the West and the end of summer seems still distant, the 1910 fires and the history of fire management by the U.S. Forest Service offers some perspective on why today’s fires may seem more widespread and frequent than in previous decades.  For those of you living in states where it feels like you may never see blue skies again, take heart! September – and its cooler temps – is just around the corner.