9/7/12: The Evolution of American Public Education

With autumn approaching, school buses and children carrying backpacks have again become a common sight in most communities. And, as in most election cycles, many communities are facing ballot measures over school funding, union rights, or some other related issue that will have a major impact on their public educational institutions. In Idaho, a ballot measure will appear this fall that asks voters to decide whether to strike down the Legislature’s 2010 laws that emphasized technology over traditional classroom practices and reduced collective bargaining rights for the Idaho Education Association and its local chapters. Having just published a history of the IEA this past spring, we thought it timely to provide a bit of history about the nation’s public education system.

While public education has become a quintessential part of the American experience, that wasn’t always the case. The nation’s earliest public schools were established in the Massachusetts Bay Colony in 1647. Although they were public schools (called “common schools” at the time) these institutions taught Puritan values with curriculum that more closely resembled today’s private religious schools. Throughout the 1700s, however, schools remained scarce and most children attended “dame schools” that provided part day-care and part informal education. Generally, dames were mothers who looked after neighborhood children while going about their household duties. Children learned the alphabet, numbers, prayers and domestic responsibilities. Anything that resembled today’s widespread, formal, and free education would need a champion, as well as a funding source.

Congress’s 1785 law ordering a survey of America’s Northwest Territory provided that revenue. The survey method used in the Northwest Territory – and across the remaining territory of the United States – created 36-square mile townships, and within those townships, 36 individual sections that measured one square mile each. Sections 16 and 36 were reserved at the time of statehood strictly to raise revenue for each state’s public education system. The income from these land grants went toward some of the earliest state universities and funded schools for children as more and more settlers moved West.

Soon, the idea that education was key to a thriving democracy took hold and became the foundation for American public schooling. For example, Pennsylvania’s constitution required free public education in 1790 to insure that poor children could get an education. To facilitate teaching all students, New York’s Public School Society established a system in 1805 that arranged for a school master to teach older students, and for older students to then teach younger ones. Boston built the first public high school in 1820 and Massachusetts established the first State Board of Education in 1837. 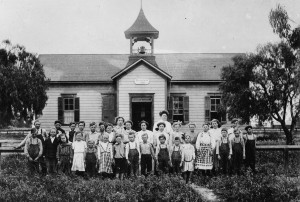 Of course, not everyone had access to the free universal education model. Female students were not allowed to attend school outside the home until the end of the 1700s. In fact, even into the early 1900s, girls were discouraged from attending school beyond their primary years. While girls could continue their education if their ability and financial situation allowed, it was not the norm and was not an option for all female students. African Americans did not have equal access, either. Emancipation provided some changes, and African Americans worked to bolster public education in the South during the Reconstruction Era (1865-1877). But, as with most changes that occurred during Reconstruction, the access to equal public education was short-lived. The U.S. Supreme Court’s 1896 “separate but equal” decision in Plessy v. Ferguson case legalized the establishment of racially segregated schools. Not until the U.S. Supreme Court reversed that doctrine in the 1954 Brown v. Board of Education decision was segregation in schools declared unconstitutional, although conflicts concerning integration continued for another two decades.

While segregated schools were not a contentious issue in every state, other major historical events affected education everywhere. The Great Depression was one of those which left its mark on all American schools, causing long-term changes to the American public school curriculum. Schools faced the widespread departure of young students who left to find work to help support their families during the depths of the Depression. But those young adults were often ill-prepared for work outside the classroom, and education planners soon recognized that classical studies might not be for all students. As jobs grew ever scarcer in the 1930s, the schools developed vocational programs for students not bound for university studies, in the hopes of providing America’s youth with practical skills. Additionally, the adult workforce supported mandatory school attendance to decrease competition for employment. The concept of vocational training stuck, and most students today get a combination of classical studies with the option of vocational courses. 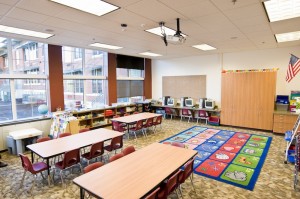 Public education continues to evolve and change with the ever-developing needs of our newest citizens. We see keyboarding taught now as early as 1st grade, while cursive (see SHRA’s post on Historical Research and the Importance of Cursive Writing) seems to be losing the battle to stay relevant. The historic idea of using public education to create good and productive democratic citizens clashes with those who question the need to recite the Pledge of Allegiance each day. Likewise, the New York Times ran an opinion piece recently that questioned the value of teaching algebra to every child, even as standardized tests that measure exactly those skills become more and more high-stakes. The debate over public education matters– its content, its cost, its methods – will never cease. Nevertheless, the American public education system has arguably had a greater impact in molding our nation and her citizenry than almost any other public institution. So as you slow down for the little backpack-toting, not-yet-voting citizens crossing the street, keep in mind the long journey public education has taken, its value to our democracy and how it continues to evolve.