If it seems like you come across Abraham Lincoln at every turn in Idaho’s capital, you wouldn’t be far off. You might encounter him while walking through Julia Davis Park, driving along Capitol Boulevard, or grabbing a cup of java. The iconic Lincoln continues to keep a hold on our national imagination, as well, with America’s most famous director, Steven Spielberg, creating blockbuster movies like “Lincoln,” which attempts to capture the essence of his being. The question begs to be asked, why? Lincoln’s name conjures certain images and ideals: log cabins, top hats, honesty, and equality. But the Gem State doesn’t immediately come to mind. So, why then does Idaho identify so fiercely with the 16th President? SHRA breaks down a few of the reasons why. 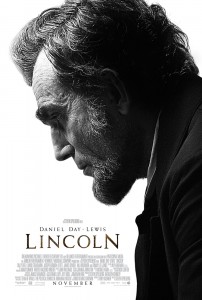 The promotional poster for Spielberg’s “Lincoln”

Most notably, Lincoln secured the acquisition of Idaho territory and its plentiful resources for the United States by affixing his signature to the law passed by Congress on March 4, 1863 that provided a government for the Territory of Idaho. Simultaneously, while the Civil War raged in the East, traces of the war reached as far west as Idaho, as well. Boise State University’s Dr. Todd Shallat explained in Lincoln Never Slept Here that both Union and Confederate ties permeated the newly established territory. Confederate supporters controlled areas of the gold-laden Boise Basin, going so far as to name their camps “Confederate Gulch” and “Richmond.” Likewise, parts of modern Valley County carry names like “Secesh River” and “Secesh Summit,” so named by like-minded pioneers. However, just a short walk away, Union supporters named their outpost “Washington,” the town we know today as Warren. While rebel factions openly cheered for Jefferson Davis and beckoned the end of the war, Lincoln’s response was swift. He approved the construction of forts on the Boise River and in Lapwai to maintain order. Lincoln also answered Confederate support by installing a judge in Idaho City, along with a regiment of infantry troops. Despite Idaho’s settlers being split into partisan groups, the Republicans (the party of the Union and Lincoln) held Idaho’s courts and governor’s office for the duration of the war. Lincoln maintained his dedication to Idaho even after the Civil War, asserting “Everything for Old Idaho,” while sending a U.S. Marshall to Boise. 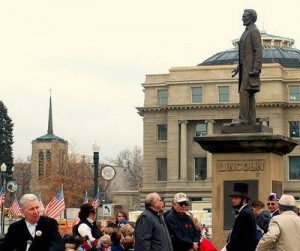 Statue of Lincoln in front of the Idaho Captiol

Lincoln’s politics also shaped the agrarian roots of Idaho. Even before Idaho territory was formed, Lincoln’s support of the 1862 Homestead Act encouraged citizens to settle on federal land and create farms, a law that had a significant impact on the future state. The Act allowed heads of households and adults at least 21 years of age to claim 160 acres of public domain land. Eager pioneers settled 270 million acres, or 10% of the United States under the Homestead Act. In Idaho, there were 60,221 homestead claims for a total of 9,733,455 acres settled, or 18% of the state’s land. A unique aspect of the Act at the time was that men, women, minorities, or immigrants all could qualify as heads of households. Lincoln’s Homestead Act required claimants to pay an $18.00 filing fee and “prove up” the land by living on it and building a home. While the monetary cost was low, the work was relentless. Myriad obstacles faced early settlers, including pioneering Idahoans. Settling land meant clearing trees or sagebrush, finding water for crops, as well as fighting insects, animals, drought, and isolation. Idaho as we know it today took shape thanks to the resilience and indefatigability of early settlers “proving up” their 160 acres. 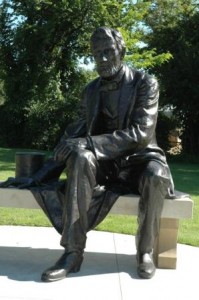 While Lincoln never made it physically to Idaho, his policies and principles influenced the Gem State from its very inception. Many think of Lincoln as Idaho’s founding father, symbolizing both the strength and spirit of this great state.

Can’t get enough of Lincoln? Be sure to check out the Lincoln Legacy Collection and Exhibition at the Idaho State Archives. The collection contains 1,500 tangible objects, books, letters, photographs, publications, paintings, and relics that directly relate to Lincoln’s unique relationship to the Rocky Mountain West. The exhibition is scheduled to open in Fall 2013 as a legacy project of the Idaho at 150 Territorial Sesquicentennial commemoration.