Next week, we will sit down and observe that most American of celebrations – Thanksgiving. For generations, the fourth Thursday of November has been set aside to mark this tradition, and few people today realize that Thanksgiving was not nationally recognized until the late 19th century, let alone that it did not enjoy a fixed place on the calendar. Thanksgiving today is one of the most predictable community celebrations in American society.

The first Thanksgiving, hosted by the Pilgrims in the Plymouth colony, marked their first successful harvest in the New World. Held in 1621, this celebration occurred more than 150 years before the first United States president, George Washington, would declare the first national Thanksgiving celebration to be held on Thursday, November 26, 1789. Between Washington’s declaration and Abraham Lincoln’s presidency, states set their own Thanksgivings by declaration. It wasn’t until 1863 – in the middle of the Civil War – that President Lincoln declared a recurring national day of Thanksgiving to be celebrated by all states on the same day: the last Thursday in November. The Confederacy did not recognize the proclamation, however, so it wasn’t until the South re-joined the Union during Reconstruction that the entire nation celebrated Thanksgiving as a unified, national holiday. 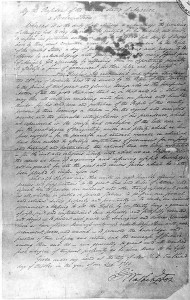 For decades after Lincoln’s declaration, the sitting president made an annual determination regarding the date of Thanksgiving, but, by tradition, the holiday was celebrated on the final Thursday of November to reflect Lincoln’s original proclamation. Things changed in 1933, when Americans found themselves mired in the depths of the Great Depression. The final Thursday of November that year fell on the last day of the month, and retailers appealed to President Franklin D. Roosevelt to shift to an earlier date in order to spur Christmas purchases. Although President Roosevelt did not cede to the request that year, 1939 presented the same problem, with Thanksgiving falling on November 30th – the fifth Thursday of the month. That year, Roosevelt declared that Thanksgiving would be held on November 23rd. The date change was met with great popular dissension, in part because the President did not make his proclamation until October 31, 1939, throwing people’s holiday plans into disarray, outraging calendar makers, and disrupting scholastic and athletic schedules. The new date became derisively known as “Franksgiving.” 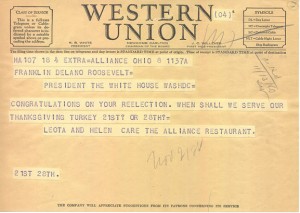 Telegram from Leota and Helen Care asking Franklin Roosevelt when they should serve their turkey, November 13, 1940. (Source)

As a result of the popular outcry, several governors broke with Roosevelt’s proclamation. Some 22 states stuck with the original November 30th date, while three declared a second Thanksgiving to be celebrated on November 30th that year, leading to even more confusion and controversy. For the next two years, President Roosevelt continued to declare that Thanksgiving would be celebrated on earlier Thursdays in November, until Congress finally took the matter up and put forth a joint resolution that the fourth Thursday of November would forever be the uniform holiday celebrated throughout the country. President Roosevelt signed the resolution into law in November 1941. Most states adjusted their recognition of the new standard date quickly, but with the country’s involvement in World War II over the next several years, many days of celebration were held in forbearance. It was not until the end of the war that the predictable national holiday we recognize today was realized. 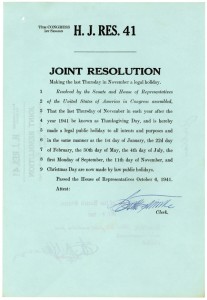 Qualities of the American experience – from big issues like universal suffrage to the smaller but no less emblematic celebration of Thanksgiving – define the character of our nation and show that even issues that are well-established now have not always been so. In an earlier blog post, we revisited the elections of 1912 and drew parallels to our recent election cycle. With the 2012 election cycle behind us now, many people are looking to see how we can come together to accomplish the business of the nation. The history of Thanksgiving illustrates that our nation’s business has always been conducted untidily. Nevertheless, our nation has continued to progress and flourish in spite of the fact that democracy is messy.  And for that, we can all be truly thankful this November 22.

(Information for this article was collected from the FDR Library, Pilgrim Hall, History.com, and the Wikipedia pages about Thanksgiving and Franksgiving. You may wish to visit these sites for more information on the administrative history of Thanksgiving.)