My favorite research projects are those that lead me to new collections and new records that are unfamiliar to me. I have spent many hours – and probably years – of my life poring over records of the Bureau of Reclamation, the General Land Office, and the Bureau of Mines. But a recent project has led us down a path to the records of the Treasury Department, and to, of all things, some history about government involvement in the hat industry.

Getting into these records has not been an easy feat. First of all, the Treasury Department is so enormous that it has spawned multiple record groups that are a bear to sort out. I started at the National Archives in College Park, Maryland, only to be told by the archivist there that I needed to go to the Washington, D.C., branch to find the exact records I needed. When I arrived there and began working with a seasoned archivist with whom I have spent many hours during my career, she promptly told me that the College Park archivist had essentially sent me downtown to get rid of me, because “no one in the National Archives knows the Treasury records. They are really, really complicated.” Well, there’s nothing I like more than a challenge!

Although I have not yet gotten to the bottom of the mystery, I have discovered that the Treasury Department records are an incredible place to – not surprisingly – reconstruct the economic history of the country, and even to understand the nuances of any one industry. In this case, I became intrigued by the pre-Depression hat industry. I discovered, for instance, that the United States government thought it necessary to provide a drawback – or import subsidy – to ladies’ trimmed hats during the World War I era. 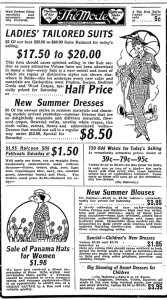 Advertisement from the Idaho Statesman circa May 1914

Hats enjoyed increasing popularity in the years leading up to the Great Depression. Between 1910 and 1919, hat values increased 19% annually. Between 1919 and 1928, the values continued to increase by an annual 15%. But, as sometimes happens in industry, countries other than the United States produced these hats more cheaply than the domestic producers. The Panama hat, woven from plants found in Ecuador and Colombia, became particularly popular at the turn of the twentieth century. Copycat industries, striving to make similar straw-like hats, sprung up in the Philippines and Java, as well as in Japan. Soon, Japan had created an incredible demand for their products in America. In 1911, Japan exported more than half a million of their hats, due entirely to growth approaching 1000% in United States purchases. In 1913, that number exported by Japan was more than two million. The industry was especially strong on Okinawa, where trade organizations sprung up to control production. By 1913, there were 49 companies on Okinawa alone, employing 8891 workers.

Advertisement for Panama Hats from the Idaho Statesman circa May 1913

No doubt there were American entrepreneurs who desired to capitalize on this new fashion trend. Soon, the United States imposed a tariff on imported hats in order to boost the domestic industry. But Americans did not have the weaving tradition found in Japan or the other countries that produced these hats, such as Taiwan. Hat companies manufacturing products in the United States still wished to utilize the hat forms made with Japanese paper or Formosa fiber, and then embellish them with the other trendy hat fashion of the day – exotic bird feathers. By 1917, at least one hat manufacturer had impressed its desires upon the Treasury Department. In order for the United States to increase its own domestic industry and at the same time boost the country’s exports, the Department allowed a drawback on imported hat forms “in a rough or unfinished condition” using Japanese paper or Formosa fibers. The Toyo Panama Hat Company of New York in particular was given permission by the Treasury Department to use these unfinished forms (imported from abroad) and then trim them, making them into American hats for export.

Although my first reaction when reading the Treasury Decisions was genuine surprise at the government’s involvement in the seeming minutiae of the hat industry, I soon realized that this trend stretched across many industries, with each action intended to boost exports and improve domestic production of all kinds of products.

This was a fun find, and made me wonder what else lies hidden in the maze of records that makes up the history of the United States Treasury Department.

Note: Statistics on hat production can be found in an October 2011 article, “The Taiwan Hat Industry: Pre-War Roots of the Post-War Miracle,” by Kelly B. Olds, originally published in Business History.