Providing environmental litigation support keeps SHRA busy with clients across the United States. Our historians love digging into primary source documents on topics relating to historical mining, land use, irrigation practices, and other issues. We also take great pride in working in general public history and jump at any opportunity to get involved with projects in our community.

SHRA is proud to call Boise, Idaho our home base. From the foothills in the north to the meandering Boise River, Boise is not only a beautiful backdrop, but it also provides SHRA historians with a unique canvas on which to practice environmental and public history. This year, Boise has been an especially exciting place as both Boise and the Idaho Territory celebrate their 150th – or sesquicentennial – birthdays. To commemorate the Boise occasion, the City of Boise’s Department of Arts & History spearheaded an effort to produce a year-long intensive project called Boise 150. Arts & History selected three themes – Community, Environment, and Enterprise – as the framework for the wide variety of projects, events, and promotions that are taking place throughout 2013, all intended to help Boise residents and visitors learn and celebrate Boise’s past, present, and future. Since the initial kickoff in January, Boise citizens have displayed an overwhelming appreciation of history.

SHRA has taken full advantage of Boise 150 and has participated in numerous events. Most recently the Boise Contemporary Theater (BCT) commissioned SHRA to help a group of young theater students create a play which integrated local history. SHRA historians facilitated a brainstorming session with the burgeoning writers and actors, showcasing their knowledge of significant events which shaped the City of Trees and also answering questions from the students. The result was the students’ performance of “Stay,” a play which incorporated local history through a story about time travel. SHRA couldn’t be prouder of taking part in such a creative take on history.

Last month SHRA’s Principal Dr. Jennifer Stevens made a presentation as part of the Boise 150 “Sesqui-Speaks” series. Offered free to the public, the year-long series of informal lectures is exploring a plethora of topics that touch upon Boise’s past and future, and seeks to cultivate a greater appreciation for Boise’s identity. Presentation topics display the diversity of Boise, thus ensuring there is something for everyone. Areas of focus have ranged from the history of African-Americans in Boise to the town’s historic embrace of opera. The 150 celebration began in January with a lecture from Boise State University’s Lynn Lubamersky, who used her research on cultural memory in Europe to probe the standing-room only audience about history and memory, and asked them to explore their own memories of Boise. Dr. Stevens presented a lecture on the history of Boise’s parks, river greenbelt, foothills, and trails, all of which create a sense of identity and place for Boiseans. November’s talk will feature SHRA’s Stephanie Milne, who will present the history of Boise State University’s Friends of Nursing organization, highlighting its fundraising success and its positive impact on Boise’s nursing profession. 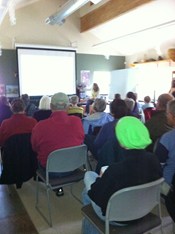 The audience for SHRA’s Jennifer Stevens’s talk on Boise’s parks and greenbelt.

Several local organizations are joining the festivities too. Recently, Milne worked on the Boise 150 Infrastructure project which traced the history of local utilities in Boise. Participants included Boise City Department of Public Works, United Water-Boise, Idaho Power, and the Bureau of Reclamation. The project highlighted the collaboration of all the agencies and the essentiality of infrastructure in Boise’s history, a subject which residents often take for granted, but without which the City would falter. (The project is currently in its final stages, so look for a forthcoming blog post which discusses the project in greater depth!) 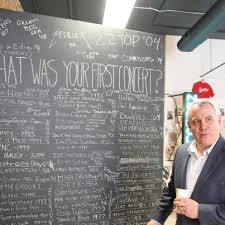 Boise’s Mayor Bieter at the Sesqui-Shop from Boise150’s Facebook page. 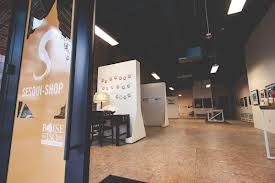 The Sesqui-shop from the Boise Weekly.

Of special note is the City of Boise’s temporary “Sesquicentennial Pop-Up Shop” or “Sesqui-Shop,” reserved by Arts & History to serve as Boise 150 headquarters for the year. Every month the Sesqui-Shop, positioned in Boise’s historic downtown, displays a new and timely exhibit. For example, April’s exhibit unveiled Arts & History’s “Remnants of Boise,” a digital project that takes visitors on a virtual tour of 25 prominent Boise locations by juxtaposing modern photographs with historic photographs, plats, and maps. On the day it opened – Boise’s monthly First Thursday event – Boiseans flocked to the Sesqui-Shop to celebrate the city’s architectural history. The crowds resulted in standing room only and a line to enter the shop. Such a response indicates how powerful and successful Boise150 has been for the entire community. 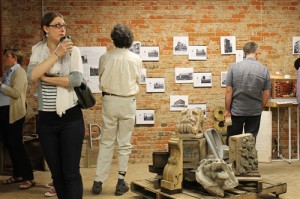 Remnants of Boise at the Sesqui-shop from here.

Due to the overwhelming reception of the Boise 150 program, several Boise City Departments as well as community organizations have commissioned historical consultants to help piece together their own historical record. Every year Arts & History sponsors a grant program and invites the general public and organizations alike to apply for project funds. In honor of the city’s sesquicentennial, Arts & History dedicated this year’s grant fund to support projects that reflect upon Boise’s history or explore its future through the prism of the Boise 150 themes. Local historians have demonstrated their ability to bring history to life and provoke great interest and appreciation among the public.

Boise City’s hard work has not gone un-noticed. Recently Harvard University’s Ash Center for Democratic Governance and Innovation at the John F. Kennedy School of Government selected the Boise City Department of Arts & History as one of the Top 25 programs for 2013. The designation represents the top 5% of the initial applicant pool. The Ash Center asserted that “while feel local governments fund historical programs, the City of Boise created the Department of Arts and History, endorsing the field as essential for decision making, community engagement, and awareness; providing contextual understanding of contemporary issues; and enabling connections for new citizens.” Other nominations included programs from the City of Boston, the City of New York, the City and County of San Francisco, the National Archives and Records Administration, and the National Aeronautics and Space Administration.

Boise 150 and all its projects prove that history not only matters, but that it can foster a lively community.  So far this year the interactive process between historian, historical object, and the general public has been on full display. Historians have capitalized on opportunities to confirm what we’ve known all along—history can sustain, inspire, and propel. The success of Boise 150 indicates that Boise citizens love history and will continue to support it. SHRA is continually inspired, supported, and encouraged by Boise and is pleased to contribute to this ever-growing, vibrant city.