At SHRA, we specialize in putting history to work.  For us, this most frequently means combing archives and weaving narratives from a variety of written or photographic records.  However, SHRA is also proud to be a part of the growing trend of oral history projects that are occurring across the country.

Currently, the oral history project most recognizable to the general public is run by the nonprofit StoryCorps based out of Brooklyn, New York. Since 2003, StoryCorps has collected and archived more than 45,000 interviews, which are all preserved at the American Folklife Center at the Library of Congress. Millions tune in each week to listen to their broadcast on NPR’s Morning Edition, and StoryCorps will be recording in our home city of Boise from June 10 to July 6.

Oral histories such as these are becoming more and more recognized as a valuable primary source for historians. They provide a perspective that is often less formulaic and official than that which is gleaned from other types of sources. Their use, however, can be tricky, as evidenced by the scholarly debate over the issue of history and memory. Scholars ask questions like: when can our memories be trusted? When are they altered and changed by the passage of time? And when are they influenced by the simple but unconscious desire for something to have happened a certain way? Using oral interviews to construct history can provide a level of detail and perspective that written documents – even when available – often cannot. But using oral histories requires meticulous research and well-planned interviews to get it right. 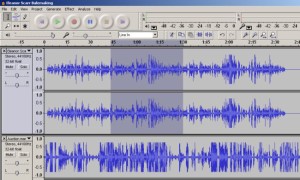 A screen shot from the Audacity program, which SHRA used to convert .wav files to .mp3 files when collecting interviews. Image credit.

Therefore, while oral testimonies cannot (and are not meant to) replace traditional historical materials like official documents, letters, and newspapers, they can reveal the role of individuals in shaping the past and conversely, how larger trends influence an individual. SHRA enjoys the opportunity to mine a variety of primary source materials, including interviews, to weave multi-dimensional narratives. The oral history movement reminds historians not only of the value of listening but also how seemingly everyday events influence and are influenced by a greater contextual history.