Recently, SHRA mailed our Summer 2013 newsletter.  Our cover article was on a boat railway that was proposed in the 1880’s to help navigate the mighty Columbia river.  This article is part of our newsletter series called “Archive Archaeology,” which highlights lighter or curious finds made in the course of our research.  A link to the full version of our newsletter is here: SHRA Summer 2013 Newsletter.

History is replete with stories of men who are giddy with the potential offered by new technology and clever proposals to fix seemingly intractable problems. In the archives such stories emerge, and a moment spent imagining what might have happened under a proposed (harebrained?) scenario can offer a welcome, brief respite from deep research. Recently, records from the Army Corps of Engineers records revealed just such a tale.

Rivers were the lifeblood of the American West, supplying water and food. But eastern pioneers needed a paradigm shift when they considered western rivers and navigation. Rivers were wide, deep, and plentiful in the East, and were heavily relied upon for transportation prior to the railroad. Many of the West’s rivers were different, rising in rugged mountains and spilling through deep canyons that most easterners had not encountered before. Only a relative few of the West’s rivers offered the navigational potential of those in the East, causing western entrepreneurs a difficult problem: how to transport the wealth of the West to active markets?

The Columbia River, which rises in Canada and gradually winds its way to the south and southwest to the Pacific, presented the greatest opportunity for 19th century navigation in the West. But the river, which forms the border between Washington and Oregon in its lower reach, presented obstacles despite its ample water.  Between Celilo Falls and The Dalles, it was was especially treacherous, with Five Mile Rapids appearing to the Army Corps of Engineers in 1875 to be “almost insurmountable.” Captain C.F. Powell stated that, “The Columbia is the great river on the Pacific Coast. In volume and commercial value it is second only to the Mississippi.” His comprehensive survey of the Columbia later that decade proposed the widening and straightening of the channel and the excavation of a great deal of rock in the river’s open section to make it navigable. The estimated cost – in 1879 – was more than $10.5 million. 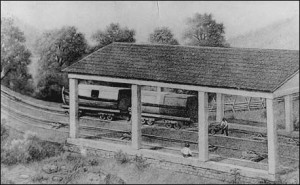 It was most likely the exorbitant price tag that caused Congress to explore alternatives. In 1888, members convened a Board of Engineer Officers to examine the potential of a “boat railway” instead, in which boats would be lifted from the river via hydraulics, transported on a car over a broad-gauge track for nine (9) miles, and then returned to the river by another lift on the other end of the rapids. The favorable report was submitted in 1890, providing an estimated cost of almost $3 million, a substantial savings over Powell’s plans. Though approved, the boat railway would only be constructed when navigation volume demanded it. In the meantime, a portage road was to be constructed around the 9-mile stretch of river.

Amazingly, a similar railway had been built in Pennsylvania in 1834. Because the Pennsylvania Mainline Canal could not offer passage between Pittsburgh in the west and Philadelphia in the east, the Allegheny Portage Railroad was built to carry boats and other cars over the Allegheny mountains that stood in the way. It was a major effort, and nothing like it was built again – not even on the Columbia. While the idea of a railway carrying a ship might not have been new, its practicality was less than assured.  Ultimately, the boat railway idea was abandoned in the West, and the Columbia was improved through a system of locks and canals that to this day raise and lower ships as they travel to and from the river’s major ports. The Allegheny Portage Railway ran for 20 years.  Today, it lives on as a National Historic Site run by the National Parks Service, and the scheme on the Columbia is relegated to the dusty archives, as a near-forgotten footnote to western expansion.