What is the greatest good? Who makes up the greatest number, and who is often left out? How long is the long run?

The United States Forest Service has struggled with these and similar questions for decades, as it has attempted to satisfy multiple stakeholders in myriad forest preserves across the country.  Idaho alone is home to more than 20,400,000 acres of National Forest, four times the area of my home state of Vermont. The Forest Service has a long and storied history across the entire West, and its impact on the region’s residents cannot be overstated.  Today’s policy debates over grazing, public access, fire management, and timber harvesting are deeply rooted in this history.  Through historical understanding and analysis, we can better understand these and other land management issues and can even shed light on the fight between federal and state control that is currently playing out in Idaho.

Map of National Forests in Idaho, US Forest Service. (Source)

This is the first of a series of blogs will highlight the history of the Forest Service and the National Forests it manages and link the forest management struggles of the past with those of the present. Part of the reason for this blog series is that the agency recently celebrated its 100th anniversary.  This occasion was marked by the publication of James G. Lewis’s “The Forest Service and the Greatest Good: A Centennial History,” and its companion film, “The Greatest Good: A Forest Service Centennial Film.” The book and the film reveal that questions over forest management have raged in the halls of forestry schools, the offices of forest managers, the papers of forest scientists, and United States forests themselves for more than 100 years.

I joined SHRA this fall after graduating from the Yale School of Forestry and Environmental Studies last spring. The School of Forestry was famous forester Gifford Pinchot’s and wilderness advocate Aldo Leopold’s alma mater, and their prescient words and visions were part of the daily academic conversation there. Leopold’s “land ethic” – the extension of our community to include soil, plants, and animals – helped guide students aspiring to be environmental scientists and managers. Leopold’s version of holism was “thinking like a mountain,” and professors and speakers borrowed his analogy in lectures, encouraging us to think like a watershed, think like a mountain climber, and so on. Likewise, Pinchot’s principle of “the greatest good of the greatest number in the long run,” based on Jeremy Bentham’s utilitarianism, was the idea on which the United States Forest Service was founded in 1905 and was often held up as a management imperative in our coursework. While my classmates and I didn’t debate this phrase outright, our disagreements over solutions to environmental and social issues usually revolved around our conflicting opinions about individual parts of that phrase. Similar disagreements can be found when combing the records of the earliest debates over the intent of United States forest preserves.

Tension defined the Forest Service’s very beginnings.  Pinchot read and revered early environmentalists like George Perkins Marsh, who explored humans’ impact on the land in his 1864 “Man and Nature.” Yet Pinchot was nevertheless adamant that the newly created U.S. forest reserves be transferred from the Department of the Interior to the Department of Agriculture so that they could be treated as a crop. Grazing, farming, and railroad expansion had denuded hundreds of millions of acres of forest in eastern and midwestern states, including landmarks like Mount Washington, the highest peak in the northeastern U.S., located in what is today the White Mountain National Forest of New Hampshire. Those who read Marsh began to recognize that deforestation was causing erosion, and erosion, in turn, caused silt to clog eastern rivers. Those connections led to a push for watershed protection through forest conservation. Yet the 1897 Organic Act, which established the intent of the forest reserves, included not only the goal of watershed protection but also the potentially conflicting goal of a consistent timber supply for the country. Thus the Forest Service’s beginnings were plagued by the well-studied tension between the ideals of conservation and those of preservation.  Lewis’s book questions whether or not the Forest Service could do both conservation and preservation work simultaneously, in the same forests. 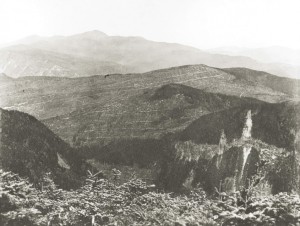 From the start, two things complicated the Forest Service’s dual mission, both politically and ecologically: grazing and fires. Not surprisingly, these same controversies surround the National Forests today. In the next installment, we’ll look at the history of these two issues and how they have played out over the past 100 years.