Copious movies over the past several years have used the film industry’s iconic motto of “lights, camera, action” to portray historical stories, both fictional and factual. While Hollywood’s films have targeted a variety of timeframes and places, the history of race relations in the United States has occupied many movie makers since 2011. In these past few years, films like 12 Years a Slave, The Butler, Django Unchained, and The Help have dominated box offices across the country. While we often perceive the film industry as a place for actors, directors and producers, historians also play an important role in bringing history to the big screen.

From the writing of screenplays to the design of sets and costumes, history consultants wear myriad hats when it comes to creating motion pictures. However, what is probably less obvious is the importance of historians’ arguments and debates about these films. This year’s blockbuster 12 Years a Slave, which is substantially based on Solomon Northup’s 1853 personal memoir of his descent from a free man to slave, has prompted serious discussion among historians. Most recently, historian Robert Brent Toplin analyzed director Steve McQueen’s depiction of Northrup’s story in the American Historical Association’s Perspectives. In the article, Toplin discussed the film’s many achievements as well as its shortcomings. Toplin maintained that while McQueen’s depiction by and large accurately portrayed the horrors of slavery, it failed to depict ways in which slaves in the antebellum South influenced their situations to obtain a certain degree of autonomy.

Toplin’s argument is part of a much bigger debate among historians on how to properly characterize U.S. slave relations in both scholarship and in motion pictures. For years historians correctly argued in their discipline’s books and journals that slaves were physical and psychological victims of a deplorable, cruel system. Historians continued this line of thought when researching and writing about segregation in the Jim Crow South. Beginning in the 1960s, however, historians began to focus their research and arguments more on the means by which these victimized members of American society found ways to assert their own wills.

Still from the movie 12 Years a Slave from here.

12 Years a Slave and the 2011 film The Help revitalized the debate. The Help, for example, provoked the Association of Black Women Historians [ABWH] to issue a comment critiquing the film’s portrayal of segregation in the south during the 1960s.  Specifically the ABWH argued that The Help’s representation of working black women as domestic servants was a:

“disappointing resurrection of Mammy—a mythical stereotype of black women who were compelled, either by slavery or segregation, to serve white families. Portrayed as asexual, loyal, and contented caretakers of whites, the caricature of Mammy allowed mainstream America to ignore the systemic racism that bound black women to backbreaking, low paying jobs where employers routinely exploited them.”

While the ABWH’s criticism of the film is justified,[1] it is important and perhaps slightly ironic that in some ways The Help depicted African American women accomplishing just what Toplin argued 12 Years a Slave lacked – that is, managing and influencing situations in order to obtain a sliver of agency. The central characters in the film, Aibileen Clark and Minny Jackson, decide to share the harsh realities of domestic servitude in Jim Crow Alabama with a white do-good socialite in spite of their fear of potential retribution. These fictional characters opt to take the risk and dictate to recent college graduate Eugenia “Skeeter” Phelan (said socialite) the unpleasant facts of their work and personal lives. As the plot evolves, the two women convince other domestic maids to share their stories, the results of which are eventually published and which lead Aibileen to pen her own memoirs. 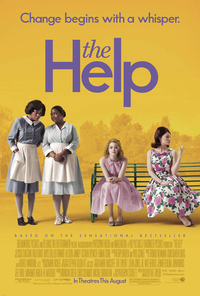 The Help movie poster from here.

It is important to note that both Toplin and the ABWH are correct. The practice of history requires a three-prong approach in which one consults past historians’ arguments, closely engages a multitude of primary sources, and asks new and thoughtful questions. Such a method is the bedrock of history. The general public may think that historians’ debates belong in the ivory tower of the academy and therefore bear little weight in the world of wider public history, including at the cinema. However, it is precisely those debates and arguments found in academic journals and books that guide all facets within the field of history. Years from now, historians’ theses on African American relations in the U.S. will change once again, and it will be just as vital for historians practicing history in the public sphere (like in film) to be first knowledgeable of historians’ evolving scholarship and second, to contribute to the breadth of information.

Despite a given story’s basis in fiction or fact, historians (academic and public alike) in many ways are the gatekeepers of providing a current portrayal of the historical record. Thus it is imperative that the most accurate historical analysis is depicted, whether it is on paper or on the silver screen. Make no qualms, the task is challenging one. The balance of showing victimization and personal sovereignty is a tall order.  However, too often, much like in 12 Years a Slave and The Help, one angle of history is sacrificed or overemphasized for another. With public access to academic journals and books limited, film is arguably the most transcendent avenue in which the general public is able to consume new arguments in historical thought. That feature films like 12 Years a Slave depict not only the terrors of slavery but also the ways—regardless of how small—slaves sought to leverage situations for their and others’ benefit is key in order to portray our current,  more nuanced and textured understanding of the era.

Editor’s Postscript (2/20/14):  Since SHRA published this blog, the National Records and Archives Administration posted a piece by the great-great-great granddaughter of Solomon Northup on their “Rediscovering Black History” blog. Vera J. Williams physically re-traced Northup’s last steps through Washington D.C. before he was sold into slavery, and documented her journey in this compelling post. Besides being related to the subject of 12 Years a Slave, Williams is also the IT Specialist for the BP Project Assistance Division at the National Archives in College Park, Maryland.

[1] The dilemma of a white woman telling the stories of black women is not lost on the author. Reference Harvard University Press Blog post.