Growing up, my parents’ kitchen table was the landing spot for a variety of disparate objects like backpacks, bills, and water bottles. But no matter how much was thrown on top, a small archive of Newsweek magazines could always be found beneath the daily rubble. By the time I was a senior in high school, I had developed a weekend tradition of unearthing the latest issue and flipping straight to the political cartoons. Only after I had judged them on their clever messaging did I peruse the rest of the issue. A recent archival discovery got me thinking about my childhood tradition and the pervasiveness of comics, as well as how they communicate information related specifically to environmental issues.

Late last year, the SHRA research team discovered a 1972 comic published by the Public Relations Department at the American Iron and Steel Institute. While the throw-back illustration and the title of “Mark Steel Fights Pollution!” was enough to elicit a few chuckles, the content of the short comic got my wheels spinning. 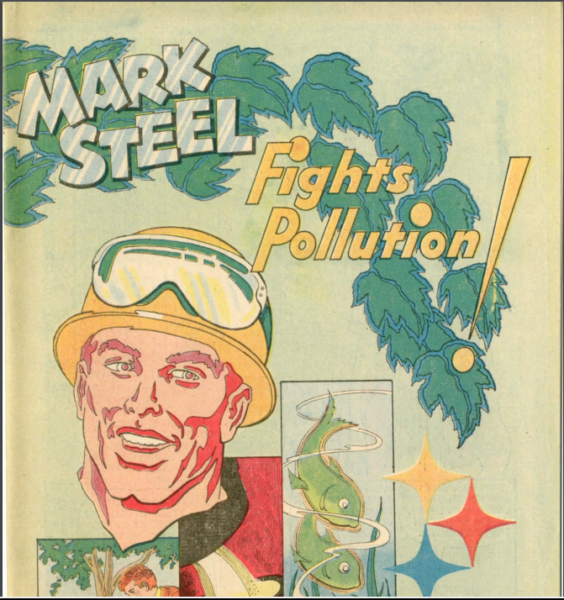 The comic’s narrative as well as its illustrations make clear that the American Iron and Steel Institute’s primary audience for the comic was children. The comic begins with two students (one male, one female) heading off to the library to find reference books on ecology, which the comic defined as “the relationship being living things and their environment.” Not long after entering the library, the two children meet “Mark Steel,” a pollution-fighting super hero donning a hard hat and a unitard embossed with the steel industry’s symbolic tri-color triangles on his chest. Together, the three embark on a journey which illuminates for the children both literally and figuratively all the ways in which the steel industry worked to protect the environment.   While it might appear that the industry created Mark Steel strictly for young audiences, it is more likely true that the comic used children as a vehicle to reach parents and guardians with the dual hope that the comic would foster a generation of steel-friendly young people who would eventually become adults and parents themselves.

Around the time that Mark Steel was published, lawmakers had initiated sweeping changes in policy due to the national concern over pollution, energy, and destruction of wetlands. For example, in December 1970, President Nixon created the Environmental Protection Agency by executive order, and two years later, Congress passed the Clean Water Act (CWA), setting a new national goal “to restore and maintain the chemical, physical, and biological integrity of the Nation’s waters.”  These two game changers forced industry to respond to the nation’s concerns on two different fronts. First, industries had to face compliance with the new laws. Second, industry had to answer to shifts in the general public’s perception of the natural environment and the far-reaching effects of the environmental movement.

During the 1960s and 1970s large businesses and industry developed varying strategies to demonstrate social responsibility. One strategy adopted by some businesses was to help “resolve” the social problems to which they admittedly had contributed: “Doing so would give business a better image in the public’s eye and benefit it in the long run,” they believed. More importantly, perhaps, was their belief that this approach would help business avoid onerous government regulations and provide additional business opportunities.[1] Perhaps then it comes as no big surprise that the Public Relations Department at the American Iron and Steel Institute embarked on the creation of Mark Steel and a comic book. After all, the comic educated children on the myriad ways in which industry was fighting pollution, and may also have even subdued a parent’s critical eye. 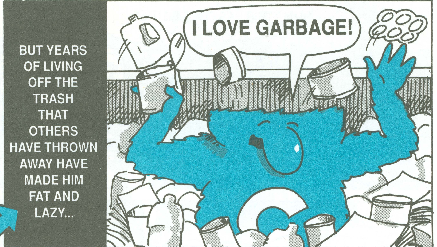 It is easy to accuse Mark Steel and his creators of trying to escape government regulation through the issuance of industry propaganda intended to promote a positive image. But an examination of the University of Nebraska-Lincoln’s (UNL) digital “Educational Comics Collection”  indicates that Mark Steel had several superhero peers with agendas of their own. In fact, the federal government, including the EPA, also has a history of using comics to disseminate information to youth. “The Adventures of the Garbage Gremlin” which is part of the EPA’s educational program on recycling, is just one of many in UNL’s digital “Government Comics Collection.”

When it comes down to it, comics provide a clever way for entities to seek, publicize, and disseminate information. And, so long as they do so, historians will have a colorful and at times amusing lens into the past.