Editor’s Note: This is the second installment in a series of blogs by SHRA Research Associate Naomi Heindel on the history of the United States Forest Service. This installment focuses on the tensions, those of a century ago and those of today, between the Forest Service and western grazing and timber interests.

As I wrote at the end of the first blog in this series, the earliest beginnings of the Forest Service were complicated by conflicting goals ranging from forest and watershed protection to grazing and timber harvesting. The first conflict to become a major issue was grazing. Conflict between U.S. land management agencies and cattle and sheep grazers long preceded the arrival of Forest Service management in the western U.S.  As President Theodore Roosevelt brought more grazing land into the forest reserves under the Organic Act (1897) and the Antiquities Act (1906), western leaders instigated a “Sagebrush Rebellion.” They demanded state rather than federal control of their lands and sought to require an act of Congress – rather than just the President’s signature, as had been the practice until then – to set aside forest reserves. In 1907, Roosevelt signed this change into law by amending the Forest Reserve Act of 1891, but he still managed to have the last say against western grazing interests. Just before the changes passed into law, he wielded his executive power one last time, adding sixteen million acres of National Forest all at once, forests that were fittingly dubbed the “Midnight Reserves.”

This instigated even more conflict. Those wanting watershed protection tried to ban grazing from the forest reserves, but Forest Service Chief Gifford Pinchot recognized the political and economic power of the livestock industry and fought to keep the reserves open to cattle and sheep. In fighting on the side of grazing rights, Pinchot made a powerful statement in favor of conservation.  His position on this issue ultimately led to his break with John Muir and the preservationists, and helps explain the differences we can see even today between the goals of the Forest Service and those of the Sierra Club, the organization that Muir founded and led. 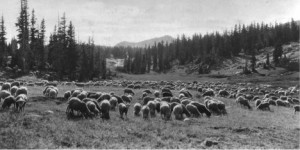 Competition over grazing permits and frustration over permit fees eventually elevated the issue of grazing in National Forests to the United States Supreme Court.  In 1911, the court handed down a ruling that upheld the Forest Service’s right to reserve parts of the public domain as National Forests, regulate those lands through fees and permits, and penalize those violating the regulations. The decision was a critical legal endorsement of important land management practices that bolstered the Forest Service’s mission. However, the ruling simultaneously fed resentment in the west, where residents felt that they were losing control of their lands and livelihoods. 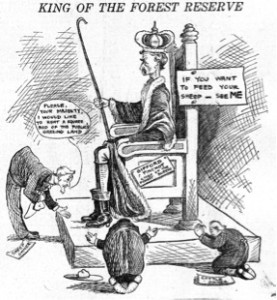 For Idaho residents, this early 1900s fight between local and federal land control will sound familiar, for the issues remain germane today.  Similar sentiment to that of the historic “Sagebrush Rebellion” is driving the current effort in Idaho, led by State Representative Lawrence Denney, to demand that the federal government turn over all 34 million acres of Idaho’s federal land to the state for management. A recent New York Times article explained that proponents of the current effort believe that federal control of public lands was only meant to be temporary, an argument that has been made many times since the early 1900s.[1] It is no coincidence that this argument comes from the western states, argues Verlyn Klinkenborg in another New York Times article; just as in 1911, that is where the majority of this country’s public lands and natural resources are located, so that is where the details of land and resource management must be hashed out.[2]  Today’s effort, which is paralleled in Utah, New Mexico, and Arizona, is not about grazing, but rather is driven by a desire to increase timber harvests and reduce wildfires in Idaho forests, according to an article written about the issue in the Idaho Statesman.[3] Far from new issues, these modern struggles are rooted in the early years of public land management and are best understood within that context. In fact, the focus of today’s Sagebrush Rebellion on timber can be seen as a result of Congress’ response to the Sagebrush Rebellion a century ago.

While it has yet to be seen what will come of the current fight between state and federal land control, in the early 1900s Congress sought to dispel the western resentment generated by the 1911 Supreme Court ruling.  To do so, Congress decided to return 25% of all timber proceeds from the National Forests to local communities. As timber grew more important economically to these communities, timber harvest levels were pushed higher. In a move that came to shape the Forest Service’s mission for decades to come, the agency narrowed and monetized the “greater good” around timber harvests and prioritized a select few within the “greatest number.”

The Forest Service would soon redefine the “greatest good” yet again, when faced with the severe wildfires of 1910. As I will discuss in the next blog in this series, these nationwide fires, which included the three million acre “Big Blowup” in Idaho, Montana, and Washington, changed the focus of the Forest Service and led to forest management policies whose influence is still felt today.