Editor’s note: Today’s blog is from our office manager and (one of our) resident book worms, Jill Johnson.

In late November 2000, I found myself tired and long way from home. Having just arrived in Auckland, New Zealand from the U.S., my powers of observation were not the best. Nonetheless, when I boarded my onward flight to New Zealand’s South Island, I did notice that I had not passed through any security screening in the domestic terminal. Even prior to September 11, 2001, this freedom of movement in an airport was remarkable for an American traveler. Imagine it: no photo identification check, no metal detectors or x-ray machines to scan your carry-on items. At the most, my boarding pass was reviewed, not to verify who I was but rather to double check that I was boarding the correct flight. My host explained that New Zealand’s location in the middle of the Pacific meant that it was highly unlikely that my small prop plane could be taken anywhere other than a destination within New Zealand, and screening is deemed unnecessary on such domestic flights.

I recently read The Skies Belong to Us: Love and Terror in the Golden Age of Hijacking, a book where the aviation passenger security set-up – or lack thereof – was similar to my own New Zealand experience, if not even more lenient. This book, however, was neither fantasy nor took place in a remote island nation. Rather, this non-fiction work was set in the United States in the late 1960’s and early 1970’s. In it, author Brendan I. Koerner recounts the domestic political climate that fostered the pandemic of hijackings that plagued commercial aviation in the U.S. from 1968 to 1972. He also describes the political and corporate machinations that stymied widespread airport security screening. 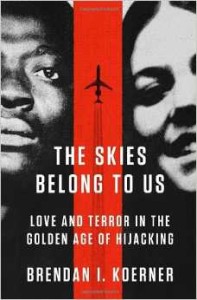 Engagingly recounting the stories of ne’er-do-wells, malcontents and misfits turned outlaws in the skies, Koerner’s book transports us back to a time of widespread unease in the U.S. that encompassed civil unrest, politically motivated crimes and more peaceful social justice actions. Prime issues occupying the American political slate included American involvement in Vietnam, the anti-war protests over said involvement, communism in Cuba and elsewhere, the Black Power and other minority-rights movements, as well as environmental activism, the sexual revolution and anti-nuclear efforts, to name just a few.

To be sure, the political landscape was busy, and so were the skyjackers. In the five-year period highlighted by Koerner, the United States averaged one skyjacking per week. Yet, despite the suggestion of mandatory security screenings as early as the 1960s, it took until 1973 for such investigation of passengers and their luggage to be implemented at American airports. Koerner’s narrative makes clear that airlines and politicians preferred to comply with skyjackers’ demands rather than risk alienating the flying public by subjecting everyone to mandatory screening. Such a policy also was deemed more economically advantageous. Looking back from 2014, it is nearly impossible to imagine a time when you were able to climb on a plane and pay for your ticket on board, or when corporations and politicians preferred to ransom back air travelers, crews and equipment rather than try to protect them from being taken hostage in the first place.

As Koerner reports, the airlines and federal government feared the financial costs associated with universal screening, and worried that airline passengers would object to being searched “like common criminals.” Perhaps under such circumstances, people would simply stop flying. Once mandatory security screenings were implemented in January 1973, however, passengers quickly adjusted to the new rules and the skyjacking phenomenon all but died out; there were no commercial airlines hijacked in the following two years, and passenger air traffic increased by more than five percent. The airlines’ concerns about the fiscal costs of searching passengers and belongings, however, were well-founded. Koerner cites a 1977 study by University of Chicago economist William Landes that asserted “that the financial costs of deterring a single hijacking was as high as $9.25 million – or put another way, $219,221 per passenger …” Nonetheless, once implemented, there was no turning back from the new security measures. Throughout his account of this period, Koerner capably animates this era with a winning balance of wry observation and original reportage, and he delivers a very accessible history of these events.

In February this year, I found myself once again in New Zealand boarding a domestic flight. I entered the terminal, checked-in via an unmanned kiosk, attached a bag tag to my checked luggage and dropped it with an airline employee. I approached my gate having never shown identification or passed through a metal detector. Finally, however, as I went to enter the boarding lounge, I ran in to my first bit of security screening: an x-ray machine. Once again, it wasn’t me the authorities were interested in; but my belongings and I were traveling on a jet this time, and they needed to be sure that my bag didn’t conceal anything potentially dangerous.