My 12-year old son recently asked me why I read the obituaries in the paper. I didn’t have to think very long before I answered: I love people’s stories.

Environmental history is – like all history – cut from the cloth of people’s stories. Human interaction with and intellectual thought about the natural environment and natural resources always have been a particular draw for me, and fortunately, I get to read a lot about these when I’m in the archives.

A recent discovery of one woman’s western adventures in the early 20th century harkened me back to a body of historical literature that details the predominant environmental rhetoric of America’s colonial period: fear of the wilderness. Her journal reminded me that traces of that fear lingered well into the 20th century (and perhaps even today).

In recent years, SHRA has conducted historical research related to several road disputes. Although I shouldn’t be surprised, the academic investigation of remote travel routes, a subject that might appear on the surface to be rather dry, leads to individual settlers’ stories about interactions with the natural environment.

The stories we find are rich with details of hardy and hardscrabble pioneers, eccentrics who came west and spent the better part of their adult lives seeking the riches that America could offer. Sometimes they pursued the unearthing of precious metals, building and then traveling on trails and roads that traversed steep, rocky slopes with drop-offs that would make your heart stop. Sometimes they settled ranches in the wild river bottoms and grew crops to feed the miners. Others built businesses in the new towns that sprung up like weeds in a spring garden, and still others ventured west just for the sheer adventure of it.

The 19th century was characterized by limited and difficult travel and restricted means of image distribution. Therefore, newspapers of the era gravitated toward printing journal-like entries by folks who described in rich detail their journeys into the mountains and wilderness, leaving behind portrayals of places that most living people would never see. The narratives provide descriptions of farms visited, who cooked a meal and its ingredients, scenery descriptions, and, most importantly for the purposes of these cases, the routes they traveled. 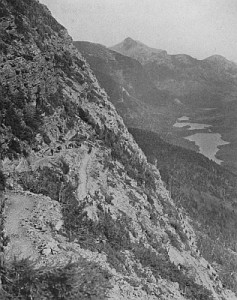 Most of the stories come from men, since the women who undoubtedly followed the pioneering men left fewer of these traces behind for historians to study. We tend to think that 19th century women might not have been attracted to such adventure, but recently I came across a series of essays by Mary Roberts Rinehart called Tenting To-Night: A Chronicle of Sport and Adventure in Glacier Park and the Cascade Mountains, published by Cosmopolitan in serial fashion in 1918.

Rinehart was an upper middle class easterner, feigning interest each spring in a summer coastal vacation, only to consistently inform her family year after year that she had instead chosen to take them on a more rugged western adventure. In 1918, she chose Glacier National Park and Washington’s Cascade Range as the family’s destination. The 14th chapter in her series, entitled “Doing the Impossible,” leaves no doubt that her climb up a remote mountain in Washington state was in fact, nearly impossible. She wrote:

As a matter of fact, we dropped two horses on that switchback. With infinite labor the packers got them back to the trail, rolling, tumbling, and roping them down to the ledge below, and there salvaging them. It was heart-breaking, nerve-racking work. Near the top was an ice-patch across a brawling waterfall. To slip on that ice-patch meant a drop of incredible distance. From broken places in the crust it was possible to see the stream below. Yet over the ice it was necessary to take ourselves and the pack. “Absolutely no riding here,” was the order, given in strained tones. For everybody’s nerves were on edge. Somehow or other, we got over. I can still see one little pack-pony wandering away from the others and traveling across that tiny ice-field on the very brink of death at the top of the precipice. The sun had softened the snow so that I fell flat into it. And there was a dreadful moment when I thought I was going to slide. 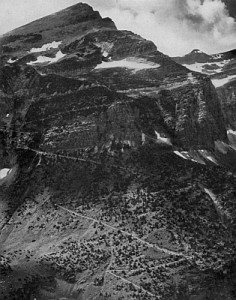 If that passage has you on edge then the entire series is worth a read and is readily available digitally through Project Gutenberg. Rinehart’s personal observations of the wilderness are simultaneously amusing to today’s modern reader yet reflective of lingering American beliefs about fear of and subsequently conquering nature that stretch back to colonial times. In just one example, Rinehart wrote: “I am afraid of the mountains. I have always the feeling that they are lying in wait. At night, their very silence is ominous…. The peace of the wilderness is not peace. It is waiting.” Her words are insightful for their commentary on American wilderness thought at the very time that the National Park Service was created, and perhaps aren’t terribly divergent from any of our own personal thoughts we’ve had during a backpacking trip. Looking at the paths the Rinehart family cut on their adventure, the roads they took, and the adventure that was devised and planned by this middle class woman, is also part of the true value of this archive find.