On June 12, 2014, the 20th FIFA World Cup officially kicked off in San Pao, Brazil. For precisely a month, more than a billion eyes will diligently watch as 32 teams compete in the sport’s marquee event. A fan only needs to watch one game to realize the World Cup is a public celebration steeped in a mixture of nationalism and love for the game of soccer. But viewed through the lens of a historian, the World Cup offers much more than intense competition; it is a window into the sport’s and various countries’ histories.

The origins of the game of football are cloaked in mystery. Cultures from across the globe, including Greece, Rome, Japan, China, and Egypt, point to early games involving the kicking of a ball. These early games were characterized by a rudimentary structure, roughly consisting of two teams attempting to direct a spherical object to a target on opposite sides of a field. These games lacked the framework and organization that define today’s game. In many ways it seems fitting that the British were the architects of the modern game.

In 1863, the Football Association of England established the laws of the game that define the sport. Colonization as well as the British Empire’s vast trade and commerce network only served to proliferate football’s newly minted guidelines. As author Jonathon Wilson observed in his book Inverting the Pyramid, the British exploited natural resources, specifically in South America, and in return supplied football. 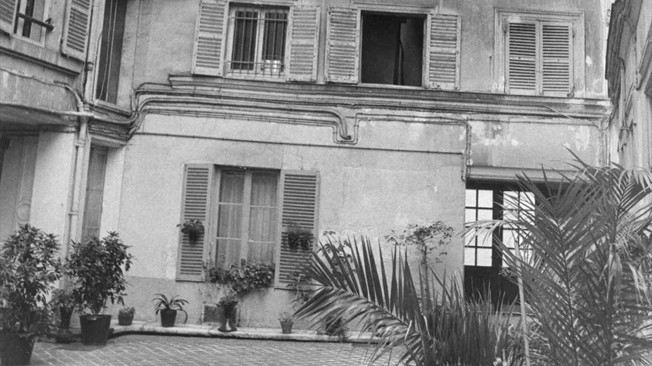 FIFA was founded in the rear of the headquarters of the Union Française de Sports Athlétiques at the Rue Saint Honoré 229 in Paris on May 21, 1904.  Image source.

Football’s popularity ballooned across the globe. Rural pastures, dirt roads, and downtown streets provided the backdrop for the sport’s evolution.  The global appeal of the sport prompted the creation of the Fédération Internationale de Football Association (FIFA) in Paris on May 21, 1904. Representatives from seven European countries signed the foundation act. FIFA membership eventually diversified with South Africa joining in 1909/10, followed by Argentina and Chile in 1912, and the United States in 1913.

World War I interrupted FIFA’s development and stymied its ultimate mission of having football unite nations. It wasn’t until the summer of 1930 that the first FIFA World Cup came to fruition. Uruguay hosted the World Cup and eventually claimed the title, a fitting way to celebrate its 100th anniversary of its independence from European powers. Emulating the structure of the Olympic Games, the World Cup occurs every four years. Since 1930, eight countries have hoisted the elusive cup. 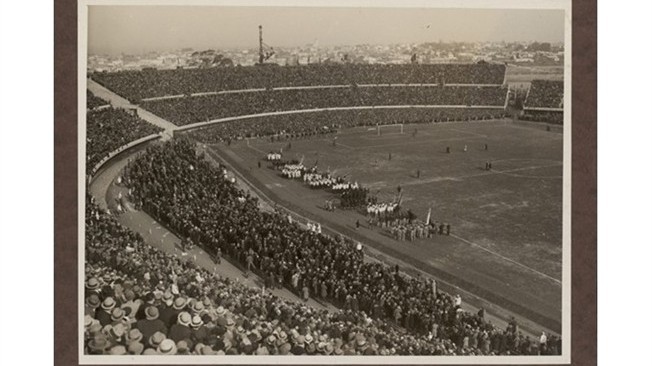 The first World Cup in Uruguay in 1930.  Image source.

Perhaps more important than its origins, the World Cup sometimes draws attention to broader ongoing historical events, as myriad national teams who may be embroiled in conflicts may attend the tournament at any given moment in time. For example, the United States hosted the 1994 tournament, which included a team from the Republic of Ireland. In order to qualify for the World Cup, the Republic of Ireland played a heated match against Northern Ireland, where the Irish Republican Army, part of an iterative Irish republican campaign had been fighting to eject the British from Northern Ireland since Irish independence. The qualification match intensified the ongoing ethno-nationalist struggles known as “the Troubles.” On June 18, 1994 the Irish fans packed into the Meadowlands stadium in New Jersey to watch the Republic of Ireland underdogs battle the favored Italians. The luck of the Irish came to fruition that day as Ireland edged out a 1-0 victory. It wasn’t until after the game that elated fans and players alike learned of the horrific ordeal that had transpired mid-game in a pub 21 miles outside of Belfast in the town of Loughinisland. Just as the game’s second half had kicked off, two masked men, perhaps provoked by Northern Ireland’s defeat in the pre-qualifying match, entered the small bar and began shooting. Loughinisland was a village of only 600 people and had been home to both Catholics and Protestants for generations; rarely had the town incurred the ramifications of the Troubles.[1] Ninety minutes after the attack at the pub (the same amount of time of a regulation football match) a loyalist paramilitary group called Ulster Volunteer Force (UVF) claimed responsibility for the shooting. Six men died in the rampage, but arrests were never made. While a delicate peace has prevailed in large part to the 1998 Belfast Good Friday Agreement, Ireland has not qualified for the World Cup since 1994. Present political wrangling in a World Cup year only further calls to mind the Loughinisland tragedy. 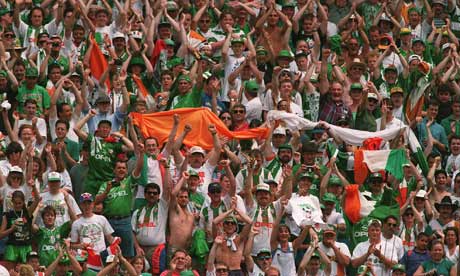 Irish fans before the Republic of Ireland’s match versus Italy in World Cup 1994.  Image source.

The Irish example[2] is just one instance of the interconnectedness between the World Cup and historical events. Copious other games and rivalries have showcased historically significant political, social, and racial issues. As is the case with most sporting events, the World Cup brings with it extreme highs and lows. The passion and nationalism associated with the World Cup offers viewers a wide variety of kaleidoscope images illuminating the history of each participating country. Every four years the World Cup brings with it celebration. Likewise it brings with it the opportunity for reflection. What will World Cup 2014 bring? Well, as historians well know, it could take decades to truly find out.[3]

[2] ESPN produced a documentary on the Loughinisland massacre, as part of its 30 for 30 series highlighting the history of various World Cups.

[3] Recently The New York Times has published several articles on topics relating to the 2014 World Cup, including here and here.