6/6/14 – Timber Harvesting and Wildfire in the National Forests: The Emergence of Multiple-Use Management

June 6, 2014
Editor’s Note: This is the third installment in a series of blogs by SHRA Environmental Analyst/Researcher Naomi Heindel on the history of the United States Forest Service. You can read the first two installments here and here.

In my previous blog, the second in this series on the history of the Forest Service, I discussed the conflicts that the Forest Service faced – and caused – during the first decade of the 1900s when it came to grazing on public lands. As I explained, the Forest Service increased timber harvests to appease western grazing interests and dispel the resentment that come to a head in 1911. This increase in timber harvests led local communities and the Forest Service itself to become more reliant on the revenue that this harvesting generated. With “the greatest good” narrowly defined around timber, the stage was set for wildfires to become another land management conflict in the National Forests, one that would trouble the agency for decades to come. Although the Forest Service perceived wildfires as great threats in the early 1900s, they would slowly start to recognize their value. The next several decades were characterized by the search for a balance between fires’ ecological benefits, grazing, timber harvests, and the budding environmental movement that took root just after World War II. During these same decades, the agency began to refer to its land management style as “multiple-use” management, an inclusive term that acknowledged the very conflicts that it was trying to balance, the very conflicts that plagued the Forest Service from the start. 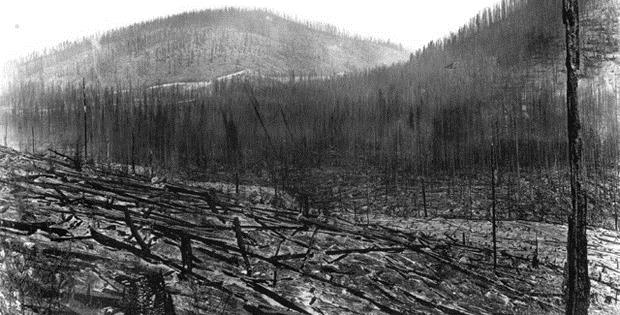 Understanding the history of wildfire management within the Forest Service requires going back to 1910, a year of widespread wildfires, when more than five million acres burned across the country. These wildfires, which included the three-million acre burn in Washington, Idaho, and Montana that was fittingly dubbed the Big Blowup, decisively added fire management to the list of controversies surrounding the National Forests. The new Forest Service Chief Henry Graves wrote that fires were “a great obstacle in the way of the practice of forestry” and had to be prevented.[1] Far from recognizing the ecological importance of fires (that would not happen in any mainstream way until the 1970s and 1980s), many in the Forest Service viewed the fires of 1910 as further justification for the agency’s anti-fire cause as well as the federal forest protection that many western states resented. The preeminent belief was that forests supplied timber, timber was a vital economic resource, and therefore all fires must be suppressed. Beginning in 1915 and continuing into the 1930s and 1940s, the Forest Service engaged in fire research, focusing on fire control rather than fire ecology. Each new fire fed the urgency for complete suppression, and throughout the next several decades the agency added every tool imaginable to achieve this goal and conserve every tract of forest for timber: the Civilian Conservation Corps, lookout towers, spotter aircraft, and eventually smokejumpers. The legacies of these suppression policies are still felt today, as evidenced by the fires of the summer of 2013 in Idaho, outside Yosemite National Park, and elsewhere in the west. 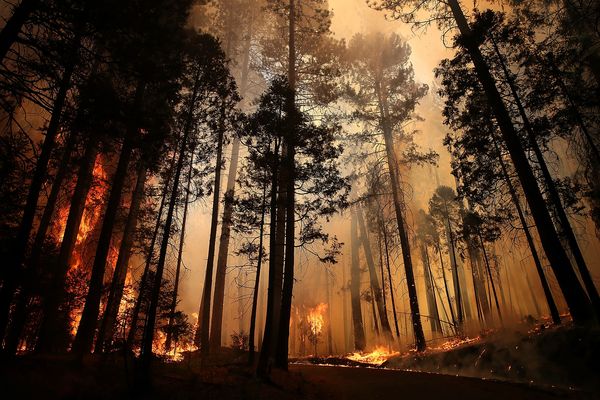 By the 1920s, the Forest Service’s positions on grazing and fire were solidified in ways that protected the forest reserves and allowed large – and strongly criticized – timber harvests. Consequently, the very nature of the Forest Service’s harvesting methods began to change. From 1905 to the 1940s, harvesting rates had been low. In fact, less than 2% of the nation’s timber harvest came from National Forests during this time.[2] This low harvesting rate had allowed the agency to maintain a wide definition of the “greatest good,” one that included forest protection and restoration. It had allowed them to establish forestry principles and policies that were sustainable “in the long run,” in the words of Gifford Pinchot, the first chief of the U.S. Forest Service. In these early years of timber harvesting from National Forests, the greatest good and the long run were both kept in focus through “sustained yield” management. In forestry, harvesting a sustained yield means harvesting the maximum amount possible without compromising the base production of the forest, so that the forest can continue to grow and harvests can continue year after year. It is akin to harvesting the interest, but not the capital. But as the agency fought fires and increased timber sales, economics rather than sustainability started to drive forest management decisions. In the early 1930s, the pressure to cut on National Forests increased and ideas of conservation lagged. Consequently, the notion of a “sustained yield” was altered to mean a steady – and high – volume harvested, one that certainly cut into the natural capital of the country’s forests.

This was a significant change from past practices, though bigger changes were still to come. As timber harvesting continued to increase through World War II, the Forest Service started to define itself through the concept of “multiple use” for the first time. The agency’s unwritten mission became to somehow embrace the competing interests of grazing, fire protection, forest preservation, and timber harvesting that had tied the agency into knots from the start. While in theory giving each of these competing interests equal standing on the agency’s priority list, “multiple use” management actually meant that the Forest Service could pick and choose where to prioritize timber harvesting and where to prioritize other uses or other forest values. The flexibility of “multiple use” benefitted the agency’s continued effort to both protect and harvest at the same time, but it also raised an important question about Pinchot’s famous line that still has relevancy today: Who decides what the greatest good is, or who the greatest number is, or how long the longest time is? What if those goals change over time?

Interestingly, this focus on multiple uses came at a time when the Forest Service’s focus was perhaps its most narrow, with timber harvesting as its highest priority. Still, multiple-use management and the dual mission of “Caring for the Land and Serving People” that is seen in the agency’s motto today allowed the Forest Service the flexibility to harvest timber even while it kept pace with the burgeoning environmental movement. Thus the late 1940s and early 1950s not only saw the first widespread use of clear-cutting in National Forests but also the codification of multiple-use management in the Multiple Use-Sustained Yield act of 1960 and the rise of early ecologists and environmentalists like Aldo Leopold. After many years as a forester, wildlife manager, and big game hunter, Leopold was among the first to measure the success of forest management by its effects on the whole forest ecosystem rather than just on timber yield. “A thing is right when it tends to preserve the integrity, stability, and beauty of the biotic community. It is wrong when it tends otherwise,” Leopold wrote.[3] Slowly, Leopold’s idea of the “land ethic” and his and others’ concerns over wilderness and wildlife rose to prominence. These new ideas called into question the Forest Service’s focus on timber above all other uses, revealed the ecological harm caused by fire suppression, and helped lay the foundation for the environmental movement of the 1960s and 1970s.

Yet, as we’ll see in the next blog in this series, the rule of multiple-use management in the National Forests still held throughout the environmental movement, the conflicts inherent in the Forest Service’s mission shifting with the times, but never vanishing entirely.