In the months leading up to the 2014 World Cup, headlines abounded with speculation on Brazil’s readiness. As thousands of tourists descended upon the various host cities, it was clear that Brazil’s infrastructure was not up to snuff. Barely finished stadiums, hastily constructed airport terminals (one of which was under a tent) and numerous uncompleted road construction projects exemplified the deficiencies. Internet commentary exploded just before the U.S. versus Germany match on June 26, 2014, when severe flooding obstructed fans headed to the stadium and all but overwhelmed locals. Nothing illuminated the dire situation more than the news that an unfinished highway overpass collapsed and killed two people in host city Belo Horizonte. The overpass was part of an urban mobility project, designed to give Brazil’s infrastructure an overhaul ahead of the tournament. At the close of the tournament, however, a total of eleven stadiums either built or renovated specifically for the tournament stood empty, with questionable prospects for future use. 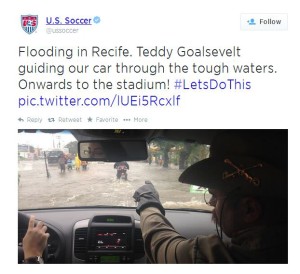 Such issues beg the question: How did it get this way?

Brazil’s first colonizers—the Portuguese—stepped on Brazilian soil around 1500, seeking to capitalize on and monopolize the land’s vast natural resources, which included gold and diamonds and fertile soil for cultivating cotton and tobacco. When the Portuguese royal family arrived (chased out of their native land by Napoleon’s armies), they brought with them the banking foundation, universities, and the opening up of trade in coastal ports. Reacting to the abolishment of slavery in 1888, dissatisfied landowners, mostly European immigrants and their descendants, united with the military to overthrow the monarchy. Following the coup, Brazil’s Old Republic endured for approximately 30 years during which some industrial and urban development took shape. However, since 1930, Brazil has endured several coups, military dictatorships, and wide-spread political corruption.1  As a result, the country’s infrastructure has suffered or, in large regions, remained undeveloped.

FIFA (international soccer’s governing body) attracts bids to host the tournament by regularly touting World Cup hosting as an investment that enhances business, infrastructure, and tourism. Bids are supposed to outline the strengths of the hopeful host nation, its current infrastructure, proposed improvements to infrastructure, and estimated cost. After receiving bids, FIFA’s 22-member Executive Committee evaluates and eventually determines which nation will host the tournament.2 Having not hosted the World Cup since 1950, the emerging South American economic power and soccer-mad nation was ultimately selected to host the 2014 FIFA World Cup.

The Brazilian government spent a jaw-dropping $14.1 billion3 on new stadiums, improvements to older stadiums, and several other tremendous transportation and infrastructure initiatives. Some of the largest promised projects, such as a bullet train, subway lines, and a monorail were either not completed or, in the case of the bullet train, even started.4 On the eve of the tournament, protesters flocked to the streets to demonstrate their frustration, believing that funds would have been better used on the construction of much needed hospitals, improved access to education for the country’s less fortunate, and safer roads. 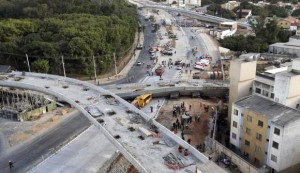 Rescue workers try to reach vehicles trapped underneath a bridge that collapsed while under construction in Belo Horizonte. From here.

But in Brazil, where a national team game equates to a holiday, Brazilian citizen protests subsided when their team successfully progressed through the early stages of the tournament. The distractions came to a screeching halt when, in its semi-final match, the Brazilian team fell 7-1 to eventual World Cup champion Germany. It was a moment of collective mourning for the host nation.

What remains to be seen is the legacy that the 2014 World Cup will leave on Brazil. With eyes shifting away from the soccer pitch and towards the 2016 Summer Olympics in Rio de Janeiro, it will be interesting to see if the country advances while still grappling with perpetually knotty issues such as its deficient infrastructure, education,  and health care that remain ever present, or if the Olympics will provide another opportunity for sports venues and tourist conveniences to trump everyday citizens’ daily needs.