SHRA » Blog » Features » 8/8/14 – Smallpox in the Archives, a Look at the Spread of Disease in Canyon County, Idaho

8/8/14 – Smallpox in the Archives, a Look at the Spread of Disease in Canyon County, Idaho

In November 1906, a smallpox epidemic broke out in Canyon County, Idaho. It was reported by citizens in Emmett that “people broken out with smallpox were walking the streets,” presumably spreading the disease without knowing it. For the next two years, county physician Dr. William Waldrop traveled extensively around the expansive rural county tending to patients young and old who were scarred with the readily identifiable pock marks or by its close cousin, chicken pox. According to Waldrop, making a clear diagnosis between the two was not always easy, and therefore he and other physicians quarantined all cases. Although quarantine was the accepted practice for infectious disease at the time, Dr. Waldrop was convinced that the inability of the county to rid itself of the contagious disease was due to the ineffectiveness of the practice. He pushed the citizens of Canyon County and surrounding areas to proceed with vaccination instead, which according to Dr. Waldrop, was a “much greater preventative, to the spread of all forms of smallpox, than quarantine.” At least six people died over the course of the two-year epidemic. Although the smallpox vaccine was available at the time, the number of years that had passed since the last epidemic led citizens to be nonchalant regarding the disease. How striking that in the course of 100 years – less, in fact – we went from such a lax demeanor regarding the disease that the Canyon County epidemic lasted more than two years, to today, when smallpox has been fully eradicated from the earth. The history of infectious disease is indeed an interesting one. The discovery of Dr. Waldrop’s travel logs and invoices to the county in the Canyon County Courthouse led me to delve more deeply into the details. 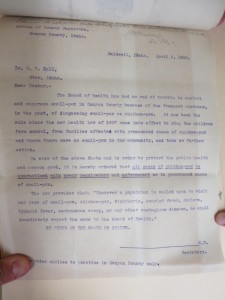 A 1908 letter from the Canyon County Physician instructing a doctor to quarantine all cases of chicken pox and smallpox.

Hippocrates, who was born in approximately 460 B.C. in Greece, is considered the first epidemiologist and the father of western medicine. Yet despite his wise observations – that different diseases occurred in different geographical locations, for instance, including yellow fever in swampy areas – it took more than 2000 additional years for another epidemiologist by the name of Walter Reed to recognize things we take for granted today, such as the fact that mosquitos carried malaria, discovered in 1900.

Despite the slow turn of science, vaccines for some diseases were gradually becoming more widely available by the mid-19th century, and public policy encouraged their use. For instance, British scientist Edward Jenner discovered in 1796 that exposing humans to cowpox virus gave them immunity to smallpox. As a result of such discoveries, the United States Congress authorized the creation of the U.S. Vaccine Agency in 1813 and provided free postage to any package less than .5 ounces if it carried the smallpox vaccine. 1 But continued low vaccination rates led to new epidemics in the latter part of the century such as the one in Canyon County. Doctors like Dr. Waldrop and others across the country began to systematically collect data to demonstrate disease spread and encourage greater vaccinations. The overwhelming statistics eventually led to stricter requirements for immunizations, and by 1922, most schools required proof of smallpox vaccination before a student could attend classes. 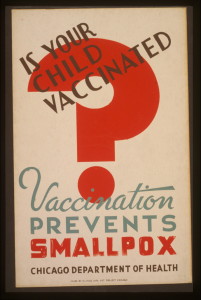 Poster promoting smallpox vaccination circa 1941 via the Library of Congress.

Despite these precautions, the disease still persisted, and in 1947, a particularly virulent strain made its way through New York City. That epidemic inspired improvements to the vaccine, and by the 1960s, several countries signed on to the World Health Organization’s resolution to fully eradicate the disease within 10 years. In 1980, the disease was declared completely gone.

Of course smallpox was only one of dozens of contagious diseases that killed or permanently disabled or scarred large numbers of people, including polio, scarlet fever, and cholera. Today, the world is facing an outbreak of a feared virus known as Ebola which has broken out in three countries on the continent of Africa. There is no known cure and a majority of people who contact the disease die from it. Although it is known to be carried through bodily fluids, reactions to it have varied considerably. In some places, there is near hysteria due to the apparent ease with which the disease is transmitted; in other places such as Sierra Leone, there is a contingent of deniers that the disease exists at all. Among believers, however, there is fear that the disease will spread to other continents as well, including North America.

Today, the opportunities for disease to spread rapidly outside of rural areas are great, as travel is relatively easy and our globe is more intimately interconnected. When the Canyon County smallpox epidemic broke out, travel was not nearly as extensive and therefore such outbreaks could be more easily contained. As physicians and scientists continue to work toward the eradication of disease through vaccination, there remains deep seated opposition to vaccines among some populations. Despite this opposition, it is impossible to ignore the significant positive effects that such science has had on human beings and the lives it has saved. 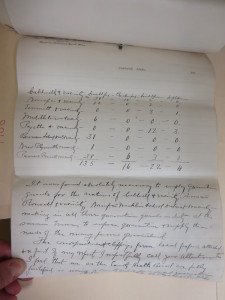 Thanks to the College of the Physicians of Philadelphia for providing reliable and useful information regarding the history of vaccines, and “Historic Developments of Epidemiology” in Introduction to Epidemiology (Jones and Barlett Learning, 2010).