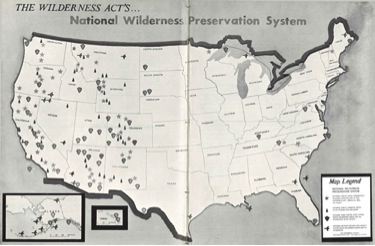 When Congress first created the National Wilderness Preservation System in September 1964, (1) they protected nine million acres of National Forest. On this 1964 map, which was published in the Wilderness Society’s magazine The Living Wilderness, stars represent those first federally designated wilderness areas. The other icons denote potential wilderness areas, foreshadowing the tremendous growth that wilderness conservation would see in the United States in the ensuing decades.

Today, there are 110 million acres of wilderness in 758 federally protected areas across 44 states. They cover 5% of the United States, as shown in dark green in this National Geographic map. (2) 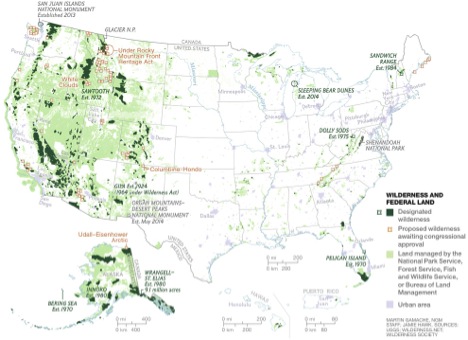 Despite the growth in preserved acreage under the system since its creation, there remain many additional proposed wilderness areas today, including the White Cloud Mountains of Idaho – shown here as an orange square – that lie at the center of current natural resource management controversies. Wilderness and wilderness conservation remain contested issues, and the historical tensions between land uses, interest groups, cultural understandings, and economic priorities that determined the layout of the original nine million acres of wilderness also lie beneath the 2014 map. Scroll to the bottom of this Huff Post Green article to see a slideshow of some of the proposed wilderness areas. (3)