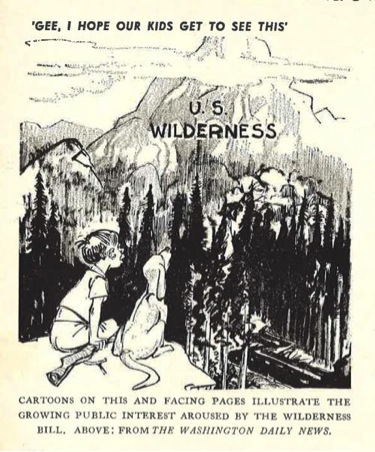 This cartoon,[i] originally printed in the Washington Daily News, was reprinted in the winter of 1962-63 in Living Wilderness, the publication of the Wilderness Society. As conservationists fought to pass the Wilderness Act, the issue of wilderness and wilderness conservation became part of mainstream conversations and media coverage. When Congress passed the law in 1964, the text of the act cited “increasing population, accompanied by expanding settlement and growing mechanization” as the reasons justifying wilderness protection, and just as the young boy in the cartoon states, the law-making body sought to conserve wilderness areas for “the American people of present and future generations.”[ii] If this boy was ten in the 1962 cartoon, then he would be in his 60s today, hiking today’s wilderness areas with his kids, enjoying mountain views, and contemplating public land management – though perhaps with a different dog.

[ii] “The Wilderness Act and Related Statutory Provisions,” via www.northcascades.org