This October, Boise, Idaho celebrates the 45th anniversary of the creation of the Greenbelt, the 25 miles of biking and walking trails that line both sides of the Boise River. The history of the Greenbelt (see SHRA blog from the summer of 2012) is interesting on its own merit, for it is the story of a forward-thinking city rescuing a trash-filled, polluted river and making it the center of the city’s downtown and the heart of community recreation. A recent Idaho Statesman article [1] explained that prior to the Greenbelt’s establishment, many Boise residents had never even seen the river, something that is hard to imagine today, given the river’s centrality to the city. In many ways, today’s focus on the Boise River and its place as a character-defining feature of the city is all thanks to the Greenbelt, a site that certainly deserves a celebration and another 45 years of biking, walking, rafting, fishing, and running.

Yet Boise was far from the first city to learn this lesson, far from the first city to line its edges with green space or to invest in bicycle infrastructure. Bicycles became popular in the Netherlands in the 1870s, and the very first bike path was a one and a half mile stretch paralleling a cobblestone street there. In the United States, the first bike path was along Ocean Parkway in Brooklyn, where a pedestrian path was split in two to allow for bicycle travel as early as 1894. Notably, Ocean Parkway was designed by Frederick Law Olmsted, the landscape architect who designed New York’s Central Park and Boston’s Emerald Necklace. 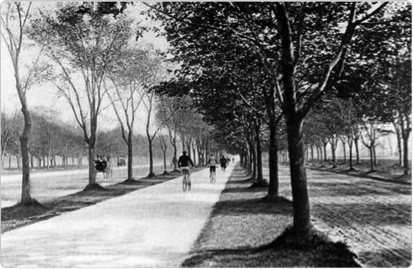 The caption to the historic photograph below, from the New York Public Library, reported that when the Ocean Parkway bike path opened in 1895, 10,000 cyclists crowded to ride it. Out of fear that they would race each other and cause accidents, cyclists were limited to riding ten miles per hour on the parkway.

Today, when Boiseans ride to work on the Greenbelt or take an afternoon stroll along the river, we take a long history of urban conservation and recreation into the future. The Greenbelt is part of what makes Boise Boise, but it’s important to recognize the bigger story of parks and rivers and bicycles of which we’re a part.

[2] “Bicycling: A Revolution in Parks,” New York City Department of Parks and Recreation