In August 2014, when Idaho Power biologists working near the Snake River’s Hells Canyon caught a 10-foot, 400-pound sturgeon, it was far from the largest fish caught on the Snake River.[i] Sturgeon, the largest fresh-water fish in North America, can live to be 75 years old and 14 feet long. Recently, when combing the archives, SHRA researchers found mention of an even larger sturgeon caught on the Snake River near Weiser in 1898. This fish, it was claimed, weighed in at 1,500 pounds. A bit of archival digging revealed amazing historical photos of several monumental-sized fish caught in southern Idaho – including what seemed to be the record fish from 1898. 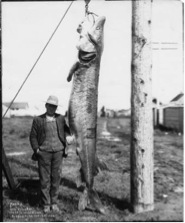 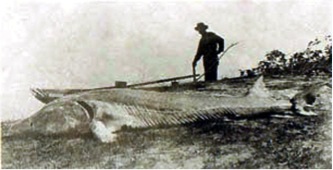 One source from 1957 also claimed that, in the early 1900s, Idaho Power Company crews working at the Swan Falls power plant on the Snake River needed to use teams of horses to land big sturgeon. “It actually happened,” the article promised,[vi] which raised some of the well-trained eyebrows at SHRA. Did it, or was this one of those “big fish” stories that grow bigger with time? The archival photos certainly confirm some very large sturgeon in our state’s rivers, both past and present, but we’ll be the first to admit that historical research often reveals the unbelievable.

[iii] “One of the giant Sturgeon found in the Lakes of Southern Idaho,” Denver Public Library