This past summer, hundreds of people from various backgrounds, including U.S. Supreme Court Justice Antonin Scalia converged in Boise, Idaho to celebrate the completion of the Snake River Basin Adjudication (SRBA), the largest and arguably the most successful water adjudication in U.S. history. Such esteem begs the question, how did this long and arduous process begin? The impetus for the SRBA extends back to the Swan Falls Settlement of 1984 between the state of Idaho and the Idaho Power Company. 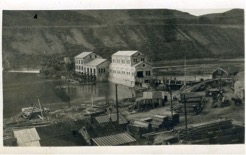 In the late 1970s a group of Idaho Power Company ratepayers filed a lawsuit against the Idaho Power Company, claiming that that hydroelectric power utility had failed to protect water rights for its Swan Falls Dam, the oldest dam on the Snake River. The group argued that the Company’s inability to protest junior water rights upriver resulted in less water in the dam and thereby higher electricity costs to customers. The Idaho Supreme Court ruled in favor of the ratepayers, which prompted Idaho Power to introduce a lawsuit against the holders of 7,500 junior water rights upstream from the Swan Falls Dam who relied on Snake River water to irrigate their crops.[i] Sensing the dire ramifications such a suit would have on untold southern Idaho farmers, Idaho Governor John Evans and Idaho Attorney General Jim Jones initiated negotiations with Idaho Power in an effort to resolve the issues, recognizing that the utility had an obligation to its customers and while farmers’ livelihoods depended on water to cultivate crops.[ii]

Collaboration between the entities resulted in an endeavor to gather data in order to establish the historic low flow of the Snake River, which provided the groups with a baseline and a starting point for further negotiations. In 1984 the parties entered into a settlement which established a fair division of water.[iii] Specifically, the Swan Falls agreement reduced minimum flow to 3,900 cubic feet per second (cfs), made approval for new water diversions upstream difficult, and most importantly, triggered a legal review of all Snake River Basin water rights.[iv] Above all else, the settlement proved that precise data coupled with a willingness to negotiate could produce impressive results in water disputes. Once the agreement was approved by the state legislature, the Snake River Basin Adjudication commenced. The Swan Falls Settlement of 1984 not only established a way in which to find common ground between hydroelectric and agriculture interests, it also laid the foundation for the long, yet successful Snake River Basin Adjudication.