September 2014 marked 100 years since the last passenger pigeon died in the Cincinnati zoo. These birds, which at one point made up 20% to 40% of the entire avian population of the United States, lived east of the Rocky Mountains, from central Canada in the north to the southern United States. It is estimated that their population once reached five billion.

The story of their demise has been retold many times during the past century. Contributing factors included relentless hunting, roost destruction, and habitat loss as America was cleared for homesteaders and agriculture. The path to extinction was accelerated by two important technological advances: telegrams, which hunters used to announce the arrival of flocks so that preparations for large hunting expeditions could be made; and railroads, which were used to ship the dead birds to urban markets quickly and in huge numbers. Behind it all lay an apparently insatiable American appetite for pigeon pie.

Archival records fill in some of the story.

Lewis Cross, a relatively unknown Michigan artist, painted the birds in the 1870s and 1880s, and said  “I can remember back in the ’70s when the sky would be so filled with them that the sun would be obscured for as long as an hour. At other times, when the sun was in the right position, a flock would appear as a perfect rainbow caused by [the birds’] iridescent coloring.” The birds’ roosting impressed the American public as much as their flying. One account by A. H. Wright, published in a 1910 edition of The Auk, described the way pigeons so overcrowded a tree in Mississippi in the early 1800s “that its top was bent to the ground, and its roots started a little on the opposite side, so as to raise a bank.”[ii] 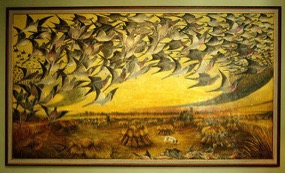 Archival images of flocks of passenger pigeons, like the illustration below from an old magazine, emphasized density and number, but also revealed hunting methods, which ranged from shooting, to netting, to clubbing out of trees or out of the air when the birds flew low. Wright’s article described a story from the 1660s in which the birds were so dense that a hunter in what would become Quebec killed 132 birds in a single shot.[iv] 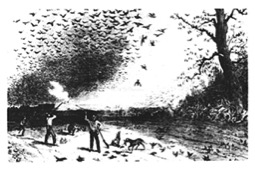 By the late 1800s, passenger pigeons were seemingly gone from the east coast and severely threatened further west. In 1908, when flocks were failing even in captivity, Ruthven Deane wrote in another Auk article, “As a sufficient time has now passed since there has been an undisputed record of a flock, or even a single bird, having been seen, those who have given this subject much attention, are forced to believe that this noble bird, in its wild state, is now extinct.”[vi]

Just this past September, a full century later, the Audubon Society published a report called “Birds and Climate Change” that brought humans’ influence on North American birds out of the archives and into the present. The report found that more than half of the 588 North American bird species studied are in trouble. 314 species, in fact, will lose more than 50% of their current range by 2080. The report and its interactive maps show the effects that climate change will have on the ranges of many North American bird species. Below, the map on the top shows the range in 2000 for the mountain blue bird, Idaho’s state bird, with winter range in blue, summer range in yellow, and year-round range in green. The map on the bottom shows the projected range in 2080 and indicates severe summer range loss, especially at high altitudes, perhaps buffered by a slight increase in winter range. 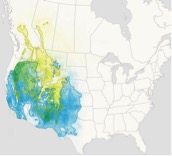 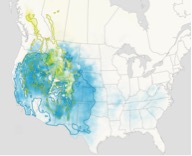 Check out the maps and predictions for your favorite bird, and let’s hope that we can take our 100-year lessons from the passenger pigeon into the future.