It’s rare today that the U.S. Postal Service requires much of American citizens wanting to send a letter aside from including the appropriate postage and legible sender/recipient information. However, in the late 19th and early 20th centuries the Post Office Department (predecessor to the Postal Service) demanded a bit more. The National Archives and Records Administration’s (NARA) Post Office Site Location Records reveal that the Post Office Department required frequent post office site reports, often sending Postmasters blank reports and urging the document’s prompt return. An essential part of each site report was a drawing of the post office and nearby features, such as adjacent post offices, railroads, highways, and rivers. Site reports included blank Township diagrams to aid in providing “a sketch that will show correct distances.”[1] On its website NARA warns that “these maps vary in content.”[1] Examination revealed that NARA was being kind.

Some applications include some impressive drawings. 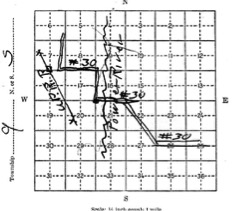 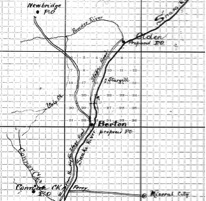 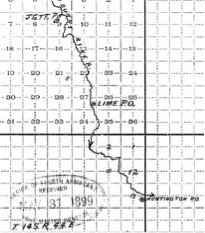 However, others divulge that not all Postmasters were blessed with an artist’s touch. 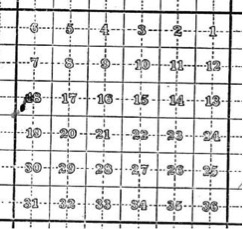 After a long day in the archives such drawings can bring a welcomed chuckle. And above all else, we can be thankful that the Postal Service no longer requires hand drawn maps.