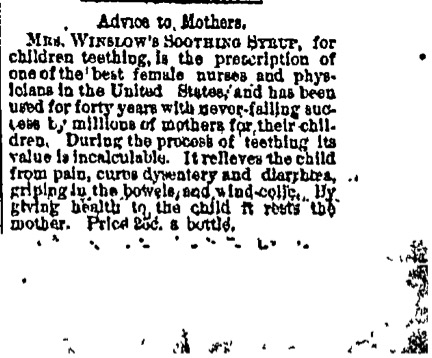 According to this advertisement in the July 19, 1889 edition of the Idaho Statesman, mothers could purchase from “one of the best female nurses and physicians in the United States” a syrup for use during teething that “…relieves the child from pain, cures dysentery and diarrhea, griping in the bowels, and wind colic” for a mere 25¢ a bottle. Called “Mrs. Winslow’s Soothing Syrup,” its greatest claim was that “by giving health to the child it rests the mother.” Quite a bargain indeed.

But just who was Mrs. Winslow? And what was in her soothing syrup? 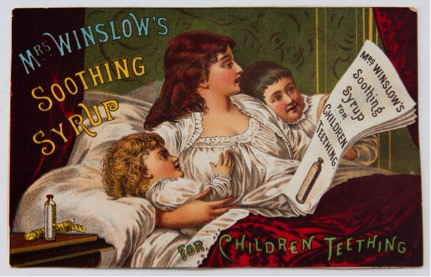 According to The Wood Library Museum of Anesthesiology, Mrs. Winslow was a nurse who cared for infants and developed a recipe that her son-in-law, Jerimiah Curtis, and his business partner turned into a medicine sensation. Initially marketed in 1845, Curtis claimed annual sales of 1.5 million bottles by 1868.

Until 1906, with the passage of the Pure Food and Drug act, it was not necessary to list ingredients on products intended for ingestion. It is not surprising, given the claimed effects of the syrup, to discover that its principal ingredients were morphine and alcohol.  Sales of such patent medicines that included intoxicants which are now strictly controlled – such as opium, morphine and cocaine – were widespread and perfectly legal.

Since consumers were unaware of what they were dosing their babies with, the chances for poisoning and even death were very real. The Museum of Healthcare in Kingston, Ontario, states that the concoction was known as “the baby killer.” Nevertheless, Mrs. Winslow’s Soothing Syrup remained on the market until 1930.

fda.gov, Janssen, Wallace F., The Story of the Laws Behind the Labels