While combing the archives, SHRA researchers found a history of solar power that included a reference to a solar-powered printing press exhibited in Paris in 1878. This was a bit of a shock – – did we really know how to harness energy from the sun as early as 136 years ago?

It turns out that the answer is yes, and that the history of solar power actually goes back a full 240 years to 1774. That’s when chemist Antoine Lavoisier and scientist Joseph Priestly figured out how to concentrate the sun’s rays to create a solar-powered furnace, the first in a series of amazing solar-powered machines captured in the historic illustrations below. 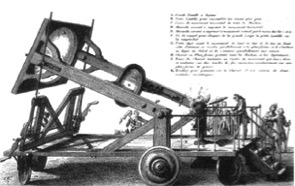 A century later, at the Universal Exposition in Paris, Augustin Mouchot exhibited a solar power plant that focused sunlight onto a steam boiler and used the steam to power a steam engine that in turn ran a small printing press. His assistant, Abel Pifre, exhibited another solar-powered printing press in the Jardin des Tuileries in 1882. 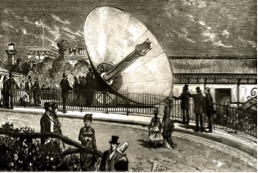 Mouchot’s designs were so impressive that the French government funded his full-time solar power research pursuits. Yet Mouchot’s prescient thoughts on solar power are almost more striking than his fantastic machines:  ‘“Eventually industry will no longer find in Europe the resources to satisfy its prodigious expansion,” he warned. “Coal will undoubtedly be used up. What will industry do then?”’[iii] 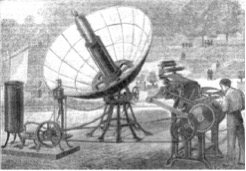 Even in the 1870s, the answer to Mouchot’s question had largely been answered, at least according to an 1876 Popular Science magazine article: ‘“Future generations, after the coal-mines have been exhausted, will have recourse to the sun for heat and energy. . . . The sun will be the fuel of the future.”’[v]

But, if this technology and its usefulness in providing the world with energy were known this early, why is solar power only now becoming a mainstream energy option? Despite the amazing machines, the low price of coal and oil, efficiency of coal transport, free trade laws throughout Europe, and advances in internal combustion engines made solar power – and solar power research – seem unnecessary at the dawn of the Industrial Revolution, and Mouchot’s government funding was cut. It wasn’t until the 1973 oil embargo that research into solar power enjoyed a resurgence. And by that time, the machines just weren’t quite the same.