Part of the allure of the archives is that you never know what you might uncover. Not too long ago, SHRA researchers stumbled across a January 1941 letter from Idaho State Forester Franklin Girard. While the letter was of little consequence, Girard’s evocative letterhead pitted contrasting images of lush forests against fire riddled stumps. Even more telling were the short captions which accompanied the images: “Green Forests Make The School Fund Grow” and “Burned Timber Pays No Taxes.” The captions point to a larger trend in environmental history – a recognition that healthy forests encouraged public recreation and therefore generated income for public schools, while forest fires hindered the state’s ability to generate that income and should continue to be suppressed. Girard’s letter spurred interest in the origin of how the public lands helped to fund public schools. 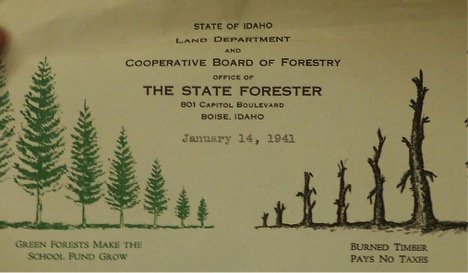 The history of the land-school connection stretches back almost all the way to the founding of this country. On May 20, 1785 Congress passed “An Ordinance for Ascertaining the Mode of Disposing the Lands in the Western Territory,” otherwise known as the Land Ordinance of 1785. The act specified that “there shall be reserved the lot No. [section] 16, of every township, for the maintenance of public schools.”[ii] Importantly, this statement established governmental support of education. While educational grants existed in the colonial period, often only the affluent had access to schools. Theoretically, the Land Ordinance Act of 1785 provided all children—regardless of their backgrounds—a path to education.[iii]

Precedent for additional land for school funding was set with the passage of the 1816 Enabling Act for Indiana which established Indiana as a state. Section 6 of the act mandated that “one entire township, which shall be designated by the president of the United States, in addition to the one heretofore reserved for that purpose, shall be reserved for the use of a seminary of learning.”[iv] Several years later Congress passed the Enabling Act of February 26, 1857 that welcomed Minnesota to the union. Minnesota was the first state to be granted sections 16 and 36 in every township as school lands.[v] The Idaho Admissions Act of 1889 likewise provided the Union’s 43rd state with sections 16 and 36 in each township.[vi] State ownership of the sections allowed for the sale of land or timber, or the establishment of leases for grazing, farming, recreational homesites, or mining as a means to generate funding for state schools.

Such information helps provide context for Forster Girard’s letterhead and his advocacy for green forests.

[ii] An Ordinance for Ascertaining the Mode of Disposing of Lands in the Western Territory, May 20, 1785