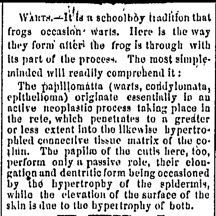 From current popular television shows like Dr. Oz to the evening news and the morning newspapers, it seems like we are constantly bombarded with information pertaining to our health. The information is generally taken from the latest scientific research and expressed straightforwardly, in terms that most Americans can understand.

A look through the archives shows that there is a long tradition of the media explaining science and health matters to the common reader. On October 22, 1870, the Idaho Tri-Weekly Statesman published a story that definitively established the connection between frogs and warts. The article promised to expose “the way (warts) form after the frog is through…” in a way that “(t)he most simple-minded will readily comprehend it.” But to a modern reader, the terms “neoplastic process,” “hypertropuled connective tissue matrix,” and “hypertrophy of the spledermis,” are as clear as the mud from which the frog emerged.

This tongue-in-cheek tone is now gone from reputable newspapers’ health features, but it is always amusing to look back at some of the more colorful shorts of 19th century reportage. While most of the language used in the article consisted of actual medical terms, gentle reader, modern science has disproven that frogs have a “…part in the process…” of wart transmission. Warts, we now know, are caused by a virus that affects humans.

According to National Geographic Kids, however, the parotid glands located behind a toad’s ears can secrete a solution that irritates skin. While not a wart, per se, perhaps it is just better to leave frogs and toads alone entirely.