Here in Idaho, the 50th anniversary of the Wilderness Act in September 2014 has a special significance. Idaho is home to the Frank Church River of No Return Wilderness, the second largest wilderness area in the United States, containing 2.4 million acres of rugged mountains, forests, and rivers. It was named after Frank Church, who served as a United States Senator from Idaho from 1957 to 1981. Just as “The Frank” is central to conservation and recreation in Idaho, Senator Church was central to the passage of the Wilderness Act in 1964 as well as the Wild and Scenic Rivers Act of 1968, both of which he sponsored in the Senate. Yet these landmark laws were just the start of Church’s long dedication to environmental legislation. In the 1970s, Church helped establish the Hells Canyon and Sawtooth National Recreation Areas, and in 1980 he helped pass the Central Idaho Wilderness Act, which created the River of No Return Wilderness and designated 125 miles of the Salmon River as wild and scenic. In 1984, Church’s name was added to the River of No Return Wilderness to honor his work. Today, this wilderness area sits between the Gospel Hump and Selway-Bitterroot Wilderness areas and overlaps five different national forests, a roadless, forested testament to Church’s commitment to conservation, recreation, and Idaho.

Today, half a century after Church and others in Congress passed the Wilderness Act, his words regarding wilderness seem prescient. “Wilderness begins where the road ends; and if the roads never end, there never will be any wilderness,” he is quoted as saying.[iii] When his name was added to the wilderness area, Church released a statement acknowledging the honor, but stating that “the real meaning for me today is to reaffirm our magnificent heritage in preserving some 2.2 million acres of Idaho wilderness for ourselves, and our children, and our children’s children.” Of the wilderness area itself, he wrote, “it will open their eyes like an Idaho sunrise on a summer morning.”[iv] The whole point of the Wilderness Act, to Church, was “to make certain that generations of Americans yet unborn will know what it is to experience life on undeveloped, unoccupied land,”[v] and to that end he suggested that everyone take a sleeping bag out to an Idaho mountainside and sleep under the stars. 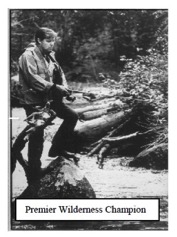 Here in Boise, Idaho, we are lucky, for Boise State University’s Albertson’s Library houses The Frank Church Papers, an extensive record collection that joins the wilderness area as another part of Church’s impressive legacy.