Right before the holidays, SHRA researchers found themselves swimming in sources relating to the development of the Columbia River. Like so many other rivers, the Columbia faced a plethora of competing interests, such as hydroelectric power, fish, navigation, irrigation, and recreation. Documentation on the subject was vast but one source in particular intrigued us. Around 1960 the League of Women Voters of Idaho, Montana, Oregon, and Washington published an expansive 34-page report on the Columbia River titled “The Great River of the West.” While the bright blue cover might have caught our attention, the content of the report prompted us to keep reading. 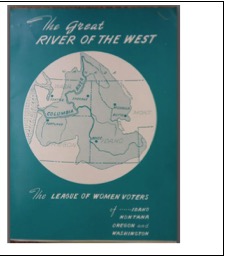 Once back at the office and huddled up with some tea, we discovered that “The Great River of the West” was part of the League of Women Voter’s nationwide effort to present its stance on water resources. The women endeavored to “support those national water policies and practices which promote coordinated administration, equitable financing and regional or river basin planning.” With this contextual framework, the prerogative of the League of Women Voters hailing from Idaho, Montana, Oregon, and Washington on the Columbia River came as no surprise. Eschewing the saying that “you can have it all, just not all at once” the League of Women Voters cogently articulated their belief that “it is not likely, however, that as has occurred in some other sections of the country, we shall have to decide fish or power! We can still have water for power and for commerce and for industrial use; clean water for humans and fish and water for crops and forests; unspoiled streams for esthetic appreciation and water for fun.”[i]

While it is unclear what impact “The Great River of the West” had on the development of the Columbia River the publication left us here at SHRA inspired. The research and attention to detail the report boasted spoke to the amazing work a passionate group of citizens can create.