This past holiday season, one of SHRA’s researchers received a gift with a historical twist. Tucked under the tree were copies of Abe Lincoln’s Speeches and Addresses and Edgar Allen Poe’s The Gold Bug. However, what made these publications unique was their small stature. Rising a mere three and a quarter inches and stretching four inches, as the pictures demonstrate, the books are pint-sized. 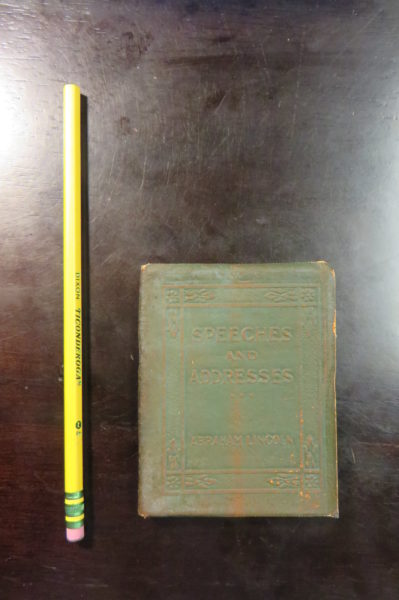 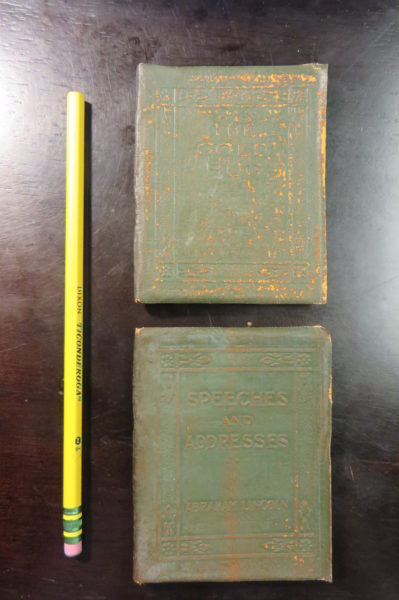 The Little Leather Library Collection published the brownish green miniature books during the early 1920s and was the first company to mass-market inexpensive books in the United States. Founded by Albert Boni, Harry Scherman, and Maxwell Sackheim in 1916, the corporation made the writings of William Bulter Yeats, Oscar Wilde, Leo Tolstoy, William Shakespeare, and many others available to the general public in bite-sized editions. While first only sold at Woolworth’s, soon the miniature classics were sold in pages of National Geographic and sometimes even popped up in a box of cereal. In 1924, Robert K. Hass, Inc., Publishers took control of the Little Leather Corporation, and Boni eventually went on to establish the Modern Library Publishing Company, of which Random House Publishers would become a subsidiary company.[i]

As is our nature here at SHRA, we checked to see if any archival collections containing these books existed. Investigation revealed two collections, one at the Robert E. Kennedy Library on the campus of California Polytechnic State University and the other at Special Collections and Archives at the University of Iowa. While it is unlikely research will necessitate examining these collections, we’ve now got them (and some tiny books!) in our back pocket.