‘“I believe I hit him first,”’ the farmer reported. ‘“Then he picked up a chair and hit me over the head.’” Two men fighting in the American West in the late 1920s might not seem related to SHRA’s research. But in this case, the farmer was furious that he was not receiving enough irrigation water on his federal reclamation project land, and the man who hit him with a chair – breaking the chair and leaving the farmer with a gash in his scalp requiring seven stitches – was none other than a U.S. Bureau of Reclamation (BOR) Superintendent. The immediate issue causing the fight was a petition to remove the watermaster, signed by the injured farmer and “several hundred” others who received federal irrigation water from a prominent western river. The farmers accused the watermaster of not giving them their full allotment of water and of instructing his ditch riders “to ‘bear down on the farmers.”’ 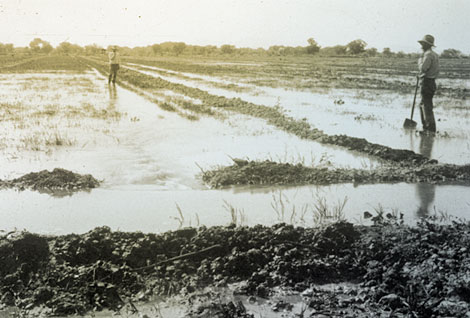 While SHRA researchers chuckled when we found the newspaper article[i] recounting this fight in the archives, we were also struck by how well it illustrated the tensions between small farmers and the BOR during the 1920s. Originally empowered in 1902 “to create and sustain family farms in the West,” the BOR spent its first decade building irrigation projects that the farmers would have ten years to pay off.[ii] At first, the BOR took pride in its farmers, but by the mid-1920s, things weren’t going so well anymore. An agricultural depression after World War I caused a decline in crop prices, leaving farmers unable to meet payment schedules. Many abandoned their farms or lived in poverty. Plus, the irrigation scheme itself did not work out as well as the BOR planned: the desert soil had become waterlogged and alkaline, and the amount of water needed to grow crops across much of the west turned out to be five times the amount assumed. “Many farmers discovered that the government could not deliver enough water,” writes historian Donald Pisani, yet the BOR denied any responsibility for the system’s failure. The BOR instead accused the irrigators of being inexperienced, eager for things to be easier than they were, and unappreciative of BOR efforts on their behalf. By the 1930s, the BOR was facing “chronic and intractable problems on most of its irrigation projects.”[iii]

The BOR regained its good image in the 1940s with its massive post-war dam construction projects, but not before the conflicts between the BOR and small farmers escalated.