With the 2014 midterm election not far behind us, an archival article from 1930 on women serving in the Idaho state legislature seemed too good not to share. The Idaho Statesman article recounted a tongue-in-cheek debate between Mrs. Frank Bruins and Mrs. W.T. Leighton that took place at a Burbank Federation meeting and revolved around whether ‘high-women or flappers’ made better legislators. Thirty-two years after Mary Wright, Clara Campbell, and Hattie Noble were the first women to serve in the Idaho legislature in 1898, the 1930 debate pitted high-brow women, who were “good bargainers,” against “the cuddly flapper type.”[i] 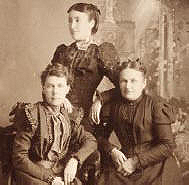 Bruins spoke in favor of allowing only high-brow women into the legislature. She argued that men had passed all the laws that they could think of on their own, and that it was time for some new ideas, “lest in a short time there would be no legislature.” Those new ideas, she argued, could only come from high-brow women.

Leighton, on the other hand, argued that “the coy little flapper can get any measure she wishes passed through immediately.” This speed would save time and tax payer dollars. She argued that it was hard enough getting men to run for the legislature currently; if high-brow women were sent in, it would be impossible. Plus, Leighton wasn’t sure that 40 high-brow women could be found in the state of Idaho in the first place.

Bruins came back with a strong rebuttal. She argued that rather than saving time, sending flappers to the legislature would only make the men want to prolong the sessions “for the pleasure of the companionship of these flappers.” And thus Bruins won the debate, and it was affirmed by the Burbank Federation (“a vehicle through which the country and city women might meet for discussion of civic problems and social life”) that only high-brow women should be sent to the legislature.