“Does Your Wife Yawn when You Kiss Her?” asked a Seattle Times headline from July, 1957.[i] “Better Buy Her an Electric Toaster.” The latest romance, the article promised, was not between men and women, but “between women and electrical gadgets.” This sentiment was not surprising given the strong advertisement and sales campaigns during the previous decades that had encouraged women to buy and use electrical appliances and thereby achieve modernity at home. But the goal of the electrical appliance buying this time was not increased efficiency or economy, but rather keeping women entertained enough that they stuck with their husbands, who, the article suggested, were on their own quite boring and “simple-minded.” The article revealed its outdatedness in more ways than one, lamenting the fact that men could no longer keep their wives’ minds on the home “by a quick left hook to the stomach or a right to the jaw.” How, the article asked, were men to get “strong-minded” women to stick around in this new age?

The answer, the Seattle Times offered, was to interest her in something “she can never quite understand:” electricity. Electricity was powerful, subtle, and unpredictable, sure to captivate any housewife’s mind. The article suggested starting easy – hence the toaster – but to soon move on to more advanced appliances, like vacuum cleaners. Next the husband could buy her a television, a radio alarm clock, a hair dryer, dishwasher, oven, massage chair, air-conditioner, freezer, and clothes washer. “By now,” the article proclaimed, “you have your girl wired in forever.” 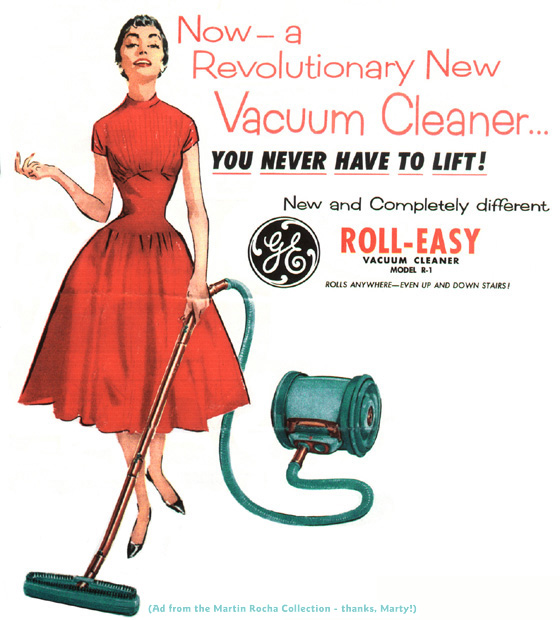 Of course, history has shown that this “wiring in” of women to the home wasn’t far from the truth. The rise of electrical appliances in homes coincided with the rise of an increasingly suburban, isolated life for many Americans, and the stereotype of the ideal housewife – tied to her cooking and cleaning – was a crucial element of this trend. While the Seattle Times article ended by doffing a hat to Thomas A. Edison, “the savior of the American home,” today we know that the history of electricity had far-reaching effects on our views of women and housework, as well as on our communities, our diets, our health, and even our environment.