When SHRA researchers travel, we don’t limit ourselves to finding history just in the archives. The interdisciplinary nature of history allows historians to cast our net wide and glean historical understanding and appreciation from everything around us. While on a recent trip to Seattle, we found a plethora of valuable sources in the archive, but we also found a piece of history on the corner of 4th Avenue and Madison Street, where the downtown Seattle YMCA resides. 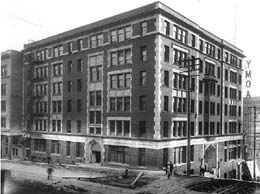 Originally established 1876—13 years before Washington became a state—the Seattle YMCA sought to support young men and instill, through the Christian faith, a sense of self-worth, responsibility, and community mindedness. The YMCA rented facilities across downtown Seattle for several years and at one point established its headquarters at what today is 1st Avenue and Cedar. These rented digs boasted Seattle’s first gymnasium, a physician to provide advice on exercise, and a bathing beach complete with a bathhouse and diving platform on Elliot Bay. For myriad reasons (including the Great Fire of 1889), the YMCA moved 11 times in a 14 year span.[1] In 1907, after extensive saving towards the goal of owning its own building, the downtown YMCA moved its location and its 75 full-time employees to the intersection of 4th Avenue and Madison Street, where it remains today.[2] 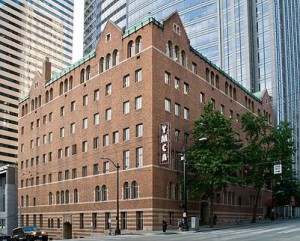 Standing in front of the striking brick building, it is clear that for well over 100 years the downtown Seattle YMCA has adapted to changing and challenging times. Adroitly shifting to meet community needs, the YMCA has modified its mission but has remained committed to developing youth, promoting healthy lifestyles, and fostering social responsibility. Additionally, inclusiveness towards women and minorities became a cornerstone of all of the YMCAs in the greater Seattle area.[3] Broadly, the building, but more importantly the people within it, endured the Depression, both World Wars, Vietnam, the Civil Rights Movement, urban renewal, recessions, economic bubbles, the rise of the Space Needle and Microsoft, the “My-Oh-My” 1995 Mariner season, and the 2014 Seahawks Superbowl victory parade.

Structures like the downtown Seattle YMCA can be found in rural towns and bustling cities all across the country. It is easy to walk by them because they are woven into our everyday lives. It takes time and effort to situate each one into a historical framework, but it is always worth it. We eagerly await our next research trip, not only to get dusty in the archives, but also to explore the built environment around us.