I am sure many of our western readers have experienced at least one earthquake in their lives. And today, with geologists’ ability to monitor and interpret seismological waves and almost instantly identify quakes around the world, you have all no doubt observed devastating earthquake scenes on television. The amount of damage and death that can occur from such a short event is mind-boggling. I have personally experienced several small quakes and two big ones – the Northridge, California quake in 1994, and the Challis, Idaho quake in 1983. Challis just experienced another quake in recent weeks, so it was timely that I found some interesting earthquake history in the records of the U.S. Geological Survey (USGS).[i] The records show just how far we’ve come in the last 100 years in understanding the geology of the earth.

In 1906, San Francisco experienced a devastating earthquake, leading to fires that burned much of the city to the ground. A letter from Professor Harry Fielding Reid at Johns Hopkins University’s Geological Laboratory to USGS director Charles Walcott asked, “Would it not be a good plan to have investigations made of the disaster in San Francisco?” Additional correspondence demonstrated how little the federal agency knew about how earthquakes occurred. After all, it wasn’t until the 1920s and 1930s that geologists determined the make-up of the earth’s structure, and it wasn’t until the 1960s that the theory of plate tectonics took hold to explain the cause of seismic events. Still, in 1906, the USGS set out to determine how far away the San Francisco quake had been felt, and they hired Reid to track annual occurrences of earthquakes. 1906 was a big year for quakes in the Americas, and letters poured in from New Mexico, Nicaragua, and San Salvador, all describing “severe” quakes. 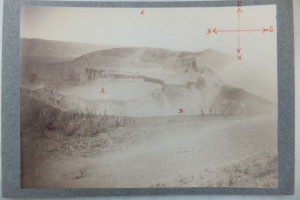 The Santiago Crater, Nicaragua, suspected cause of the Masaya earthquake of January, 1906

Reid was traveling to Mexico for research when he wrote to the USGS explaining that the “only possible chance of finding the cause of the [New Mexico] earthquake, or rather, the fault line by which the earthquake may have been caused, would be to take a camp outfit and go into the mountains and look for it.” Field work still remains an important part of seismological research, but the tools of the trade have matured greatly – and become much more reliant on technology – in the past century. Today, the location of what we now know as the “epicenter” of any earthquake is usually announced within hours of an event. 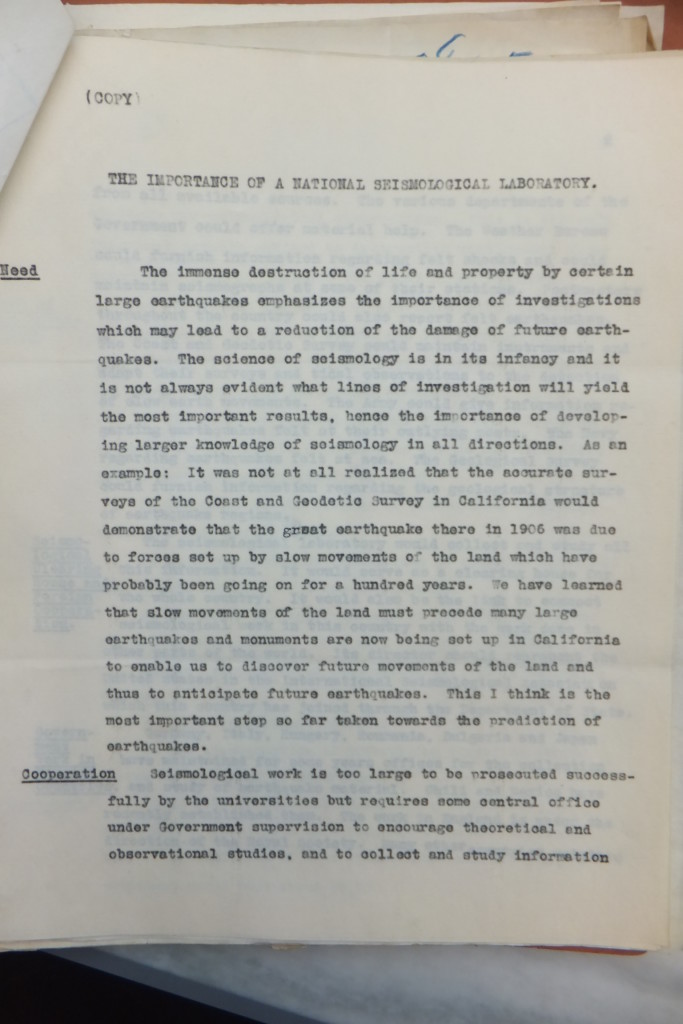 “The Importance of a National Seismological Laboratory,” Harry Fielding Reid.

Four years later, in 1910, Reid authored a brief report advocating for the creation of a National Seismological Laboratory. In the report, he explained his findings on the San Francisco quake. “We have learned that slow movements of the land must precede many large earthquakes,” he explained, going on to add that monitoring stations were being set up across California “to enable us to discover future movements of the land and thus to anticipate future earthquakes.” While Reid went on to put forward what it still the foundational theory behind plate tectonics, his hope that we would be able to predict these devastating events has not – and may not ever – come to fruition.