The Indian Affairs series in the Washington State Department of Fisheries central files was probably the last place we’d have looked for a reference to Hollywood, yet there was Marlon Brando’s name, as plain as day. In 1964, we learned, Brando participated in a fish-in along with a Puyallup tribal leader, defying Washington state law by fishing on the Puyallup River.[i] While the role Brando played in the fish-in was minor (he was released with no charge after a short arrest[ii]), the fish-ins themselves played a significant role in securing Native American fishing rights. 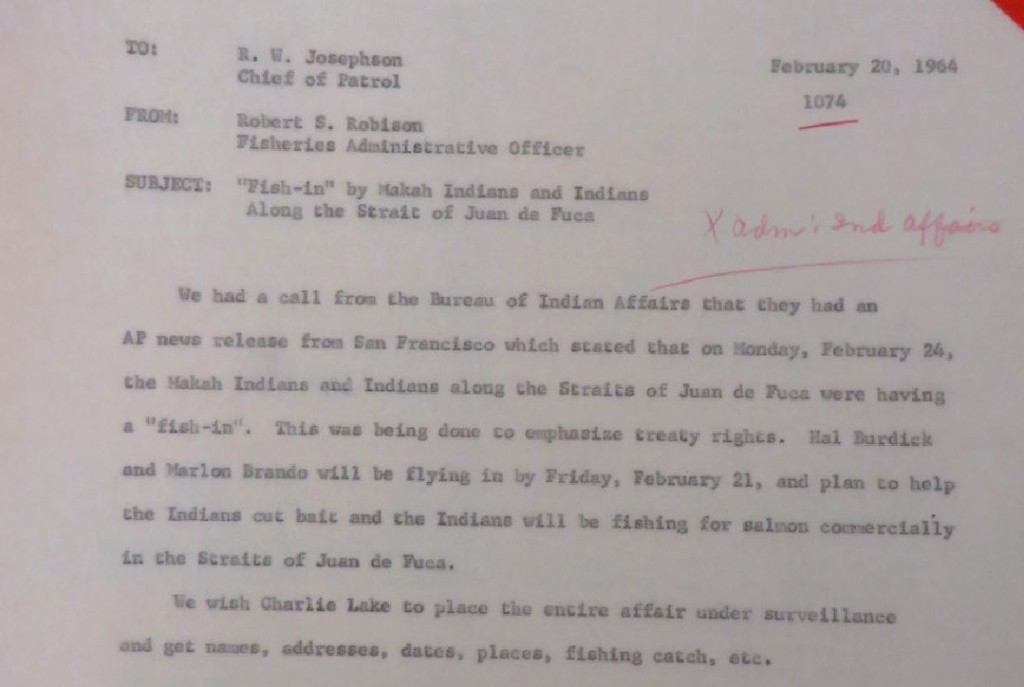 Fish-ins had been going on in Puget Sound well before Brando made his much-publicized appearance. They were one way for Native American tribes to assert their off-reservation fishing rights, rights that were reserved to the tribes by treaty but which were also increasingly threatened by state regulation and natural resource depletion. These fishing rights – on which Puget Sound tribes such as the Skagit, Nisqually, and Puyallup depended for economic and cultural subsistence – had seemed unthreatening when the treaties were signed in the 1850s. However, the first half of the 20th century saw a rapid increase in non-native, commercial and sport fish harvests as well as habitat degradation from hydropower dams, logging, and road construction. Starting in the 1950s, Washington tried to regulate off-reservation tribal fishing just as it regulated non-native fishing, a move that the area tribes believed violated their treaty rights. As a result, tensions between state officials and tribal fishermen grew to the point of boat and gear confiscations, arrests, and outright violence. The fish-ins, held by several tribes, individuals, and Native American activist organizations, purposefully escalated the conflict and brought Indian fishing into public view, demanding that historic rights be honored and linking the struggle to other civil rights violations. 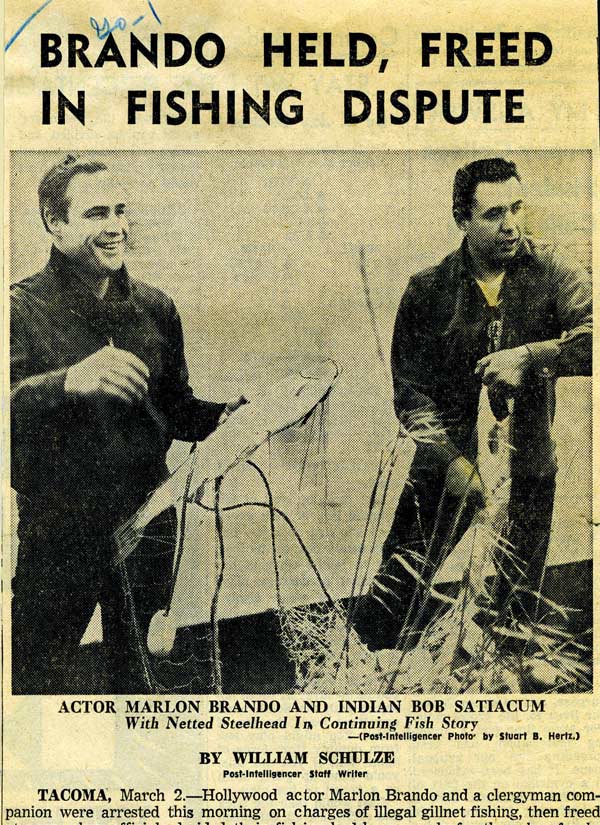 While Brando’s appearance in support of tribal fishing points to the heightened media and publicity surrounding the fish-ins, there is no doubt that they influenced public opinion and brought the issue of Native American treaty rights into focus. Most importantly, the fish-ins were part of the lead up to US v. Washington and the 1974 Boldt Decision, a landmark ruling that upheld tribes’ treaty rights to an equal share in the fisheries and that is still on the books today.

[i] Bryan Zylstra, “From the Archives: Marlon Brando and the “fish-ins,” From Our Corner, WA Secretary of State Blogs