Every early March my thoughts turn to Hite’s Cove, a steep-sided canyon along the South Fork of the Merced River just west of Yosemite National Park. For those living in the small town up the road from Hite’s Cove, as I did for three years, there is no better place to spot early spring wildflowers. The trail winds parallel to the river, well up the slope, so that the California poppies, shooting stars, bachelor’s buttons, fiesta flower, and madia – to name a few of the blooms at Hite’s Cove – stretch out on either side as you walk. It can be a dazzling experience, what with the strong sunlight, sparkling water, and brilliant poppies. Field guide and camera in hand, I will admit that I spent most of my hikes in Hite’s Cove focused on flowers and thought little about the canyon’s history. 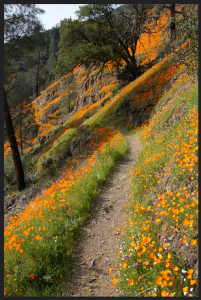 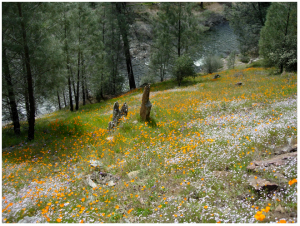 However, there’s plenty of California history to be had in the canyon. It turns out that in 1861 or 1862, a miner named John Hite discovered one of the richest quartz-gold veins in the Central Sierra. A small mining community developed at Hite’s Cove, and by 1864 there were 100 people living there operating a 10-stamp mill. Ten years later, a 20-stamp mill was in operation, Hite’s Cove was big enough to warrant a post office, and mining camp diversions like drinking and gambling were common.[i] The mine produced three million dollars’ worth of gold between 1862 and the early 1900s, and Hite became incredibly wealthy.[ii] Not far from James Savage’s trading post, Hite’s Cove holds a firm place not only in the history of the Gold Rush in the Sierra Nevada, but also in the history of the Mariposa Battalion and the forcible removal of Yosemite’s Native American tribes, some of which wintered on the warm slopes of Hite’s Cove. 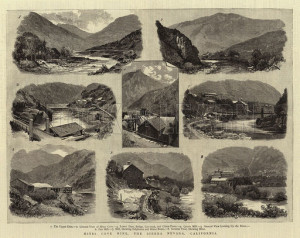 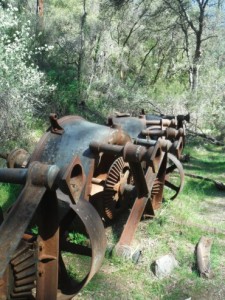 As with so many mining towns in the Sierra Nevada foothills, all of the buildings and mining facilities in Hite’s Cove burned down in 1924, and the flowers moved in. Today, the trail is managed by the U.S. Forest Service. But the Gold Rush, Native American history, the boom and bust of western mining, landscape and river conservation – it’s still all there, under the poppies.

[i] “Hites Cove,” Guide to the Ghost Towns, Mining Camps, and Other Formerly Inhabited Places in Mariposa County, California.