Looking at an image of (renowned Washington governor) Isaac Stevens, two things come to mind. First, he has a striking resemblance to Brad Pitt. Second, he looks like a man that gets what he wants, come hell or high water. As the first Territorial Governor of Washington and the Superintendent of Indian Affairs, Stevens did get what he (and by extension President Franklin Pierce) wanted. Charged with securing the land and cooperation of local tribes, Stevens negotiated a series of treaties, procuring the legal rights to 64 million acres of land in less than a year. Exuding the nineteenth century belief that land not dedicated to traditional farming was going to waste, Stevens’ treaties carried the underlying belief that Native Americans needed to assimilate into general—white—American culture by living and farming on designated reservations. However, Stevens also included a safety net of sorts in his treaties. Native Americans negotiated one key phrase in all of the treaties: “right of taking fish at all usual and accustomed grounds and stations is further secured to said Indians in common with all citizens of the Territory.” In Stevens’ eyes, the phrasing eliminated the U.S. government’s obligation to supply food to the tribes during the transitional period from their traditional way of life to their lifestyle on reservations.[i] His work complete, Stevens left the rain of the Pacific Northwest in 1857. However, his treaties and their phrasing would have long-standing implications. 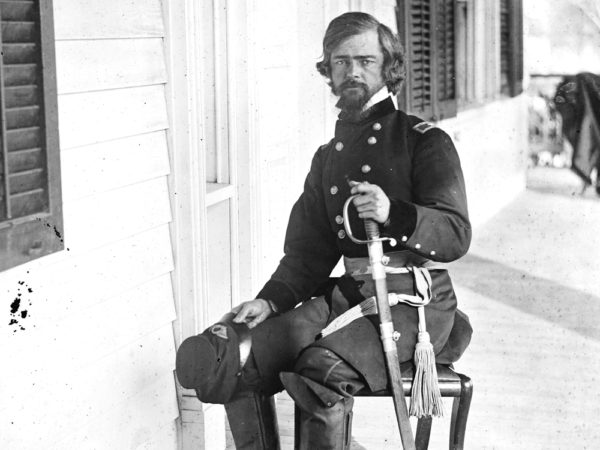 Isaac Stevens after his promotion to Brigadier General in 1861.

Committed to the yeoman farming ideal, many early American settlers concerned themselves with farming, logging, and mining, while Native Americans continued to fish at their usual and accustomed areas. However, by the turn of the 20th century the bountiful salmon and trout of the Evergreen State brought the issue of native fishing rights to the forefront. A tug-of-war between native fishing rights and entrepreneurial commercial fishing endeavors further strained already tense relationships, illuminating the muddied intentions of the state of Washington and prompting legal action. 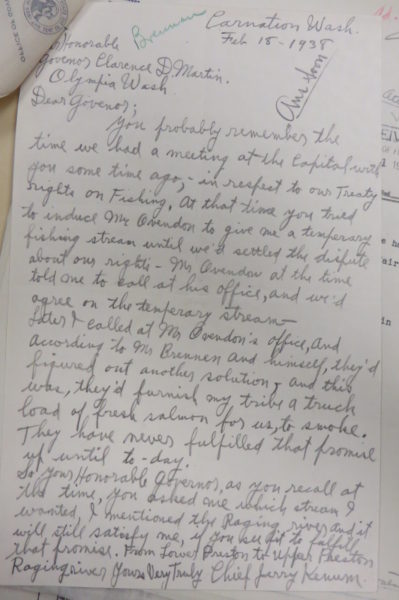 The 1940s brought with it a merry-go-round of legal proceedings that revealed the state of Washington’s evolving intent when it came to tribal fishing within its borders. As early-stage resource conservation played out in the state, a key legal ruling laid out the state’s intent “to impose on Indians equally with others…as…necessary for the conservation of fish.”[ii] The 1942 Tulee v. Washington decision sounded a warning that the state would not stop at encroachment on native fishing rights in order to conserve the fish supply that was deemed economically crucial to the state. Several years later, in 1963, the courts reaffirmed the state’s authority in Washington v. McCoy, which upheld that the state had the right to police Native Americans through “reasonable and necessary regulations.”[iii] Further exacerbating the situation were hydroelectric dams, logging, and pollution, among many other external factors, all of which severely diminished salmon and steelhead populations. However, instead of targeting one of these outside elements to preserve fish runs, the state of Washington aimed to limit native fishing rights. As a result, what had started as confusion and frustration bubbled over into activism on the part of native tribes. Fish-ins became a common tool used by Native Americans to bring awareness to the issue and to lobby for authentic changes. 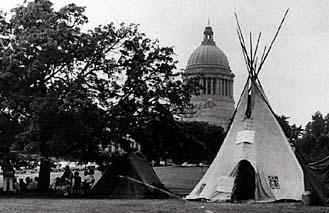 Teepees at the Washington State Capitol

The situation continued to escalate, and by the 1970s, tribal members finally secured the means by which to fight these restrictions. In 1970, nine days after violence erupted between Native Americans and the Washington State Game Department and state police on the Puyallup River, the U.S. Attorney for Western Washington filed U.S. v. Washington, the case that set the stage for what would become known as the Boldt Decision. Acting in trust for the tribes, the United States challenged the right of Washington State to regulate fishing on reservations created by federal treaties, and for the next several years, U.S. v. Washington made its way through the hierarchy of courts. Starting on August 27, 1973 Federal Judge George Boldt held court six days a week, including on the Labor Day holiday. The marathon proceedings included the testimony of tribal members and 49 expert witnesses. It wasn’t until February 12, 1974 that Boldt issued his ruling, which allocated 50% of the annual catch to treaty tribes. Citing Stevens’ phrasing of “usual and accustomed grounds,” Boldt maintained that it was out of the purview of the state to regulate something that had belonged to the tribes all along. Boldt’s decision prompted the state of Washington to standardize fishing by non-natives, which infuriated fishermen across the state. In 1975 the Ninth Circuit Court of Appeals upheld Boldt’s ruling, as did the U.S. Supreme Court in 1979. [iv]

For the past 40 years the Boldt Decision has dictated fishing policies in Washington state, but the fight over the ever-diminishing supply of fish remains very much alive. Equally alive is Isaac Stevens’ phrasing of “usual and accustomed grounds,” which, when thinking back to Isaac Stevens’ original intent, possesses a certain degree of irony.