Despite my many research trips to Washington D.C. I’ve never had the opportunity to experience the city’s renowned cherry blossoms. Instead, every spring I gaze at the National Park Service’s live feed of the Cherry Blossom Web Cam. While most of the time my thoughts are rather rudimentary (“Golly, those flowers sure are pretty…”) this April, work blurred with blossoms, and I found myself pondering what FDR might have been feeling in the spring of 1941, as Washington D.C.’s backdrop turned pink, mere months after the brutal attack on Pearl Harbor. The thought prompted me to dig into the history of D.C.’s cherry blossoms. 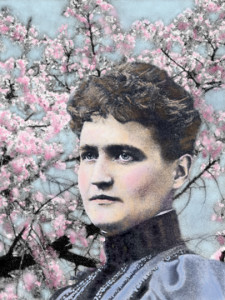 The effort to bring cherry blossoms to the nation’s capital began in 1885 when D.C. native Eliza Ruhamah Scidmore returned from a trip to Japan, where she became captivated by the vibrant flowers. Scidmore approached the U.S. Army Superintendent of the Office of Public Buildings and Grounds with a proposal to line the reclaimed Potomac waterfront with cherry trees, but no action was taken. Undeterred, Scidmore brought the topic up with every subsequent superintendent over the next 24 years. It wasn’t until 1909 that Scidmore found an ally in First Lady Helen Herron Taft, who thought Scidmore’s idea inspired. Even in the early twentieth century, word traveled quickly around D.C., and soon the City of Tokyo offered the United States a donation of 2,000 cherry trees. On January 6, 1910 the donated trees arrived in Washington, D.C. However, Scidmore’s dream was once again thwarted when the Department of Agriculture inspected the trees and discovered that they were diseased. As a result, the trees were destroyed. The Japanese responded by sending a second donation of 3,020 cherry trees, which arrived in D.C. in March 1912. To commemorate the event, First Lady Taft and the wife of the Japanese Ambassador, Viscountess Chinda, planted two Yoshino cherry trees on the northern bank of the Tidal Basin. While the simple ceremony was only witnessed by a few people, it was the origin of what is now the National Cherry Blossom Festival.[i] 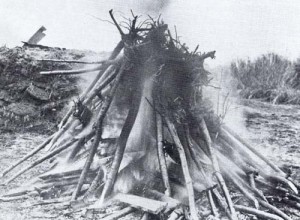 Burning of the Original Shipment of Cherry Trees in 1910.

While we may never know exactly how FDR felt in the spring of 1941 when the cherry trees blossomed, we do know that others looked upon the trees with contempt. After the attack on Pearl Harbor, four cherry trees were cut down in what was presumed to be a symbolic act of retaliation.[ii] But reconciliation was on the horizon: eleven years later, with the parent stock of D.C.’s cherry blossoms in decline in Tokyo, the United States shipped budwoods back to Japan in an attempt to restore the diminishing cherry tree population.[iii]

The cherry trees in bloom with the Jefferson Memorial, Washington, DC