This year, Vermont is celebrating 100 years of town forests. Town forests are just that – tracts of forest managed by the town, something that sounds so simple that it’s easy to forget their significance. I have fond memories of tromping through our town forest growing up in Ferrisburgh; it is on Shellhouse Mountain, a cliffy ridge surrounded by farm fields that we visited in hopes of spotting a bobcat.

The idea behind town forests in New England stems back to the 1600s, when towns consisted of small villages surrounded by extensive uplands, meadows, fields, and marshes that were held in common for farming, grazing, timber, fuel, and more. By 1700, most of these commons had been sold into private ownership, but by the late 1800s Vermont towns, with the help of prominent conservationists such as Gifford Pinchot and Frederick Billings, started setting aside and actively replanting tracts of forest.[i] The 1915 Municipal Forest Act formalized the process, enabling towns to purchase lands to grow timber to benefit their school endowments, similar to how state lands were set aside to generate public school funds. Two years later the law was amended, reserving these lands as municipal forests for the broader public benefit. By 1950, there were 68 town forests in the state covering more than 16,000 acres, and the Vermont Forest Service set out to establish a forest in every town. After several decades of amendments and definitions, in 1973 town forests were defined as tracts of land “devoted to producing wood products, maintaining wildlife habitat, protecting water supplies, providing forest recreation and conservation education.”[ii]

Ferrisburgh’s town forest on Shellhouse Mountain was set aside as a woodlot in 1881, though the land was not bequeathed to the town until 1962. The forest was cut for timber in the 1950s, but by the late 1960s conservation ranked high among the town’s priorities when it came to forest management. From the 1990s until today, the Ferrisburgh Conservation Commission has managed the forest for wildlife habitat, protection of uncommon natural communities, limited and careful high-value timber harvesting for non-profit or educational purposes, and ecological research.[iii] The forest is open to walkers, hunters, bird watchers, and kids hoping to spot bobcat scat. 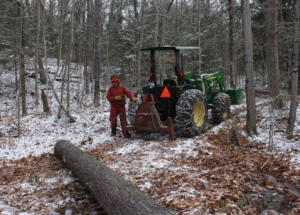 Today, Vermont has 168 town forests covering 67,000 acres, meaning that more than half of Vermont towns manage forests.[iv] An article in Northern Woodlands offers that these town forests are reminders “of a time of town commons, poor farms, and public lots – when people collaborated on stewardship, made decisions as a group, and reaped the rewards of all that work together.”[v] They are also current proof of the power of 100 years of public policy and land management at both state and town levels. Here’s to the next 100 years, on Shellhouse Mountain and in town forests across the state.