While reading correspondence from the Bureau of Reclamation recently, SHRA researchers came across indications that some of the earliest snow surveys, dating back to the early 1920s, were conducted in the Boise River watershed. This piqued our interest in the early history of snow surveys and how technological developments have improved their accuracy.

At a very basic level, snow surveys use measurements of mountain snow depth and moisture to help downstream farmers, irrigators, city planners, and government agencies prepare for the floods or droughts of the coming runoff season. As a sobering National Geographic article from September 2014 reminded us, more than 75% of the West’s water comes from snow, so it’s no wonder that snow surveys developed here to quantify that link between snow in the mountains and water in our rivers and pipes.[i]

While planes, snowmobiles, electronic monitoring, and computer modeling are essential parts of snow surveys today, this was far from the case in the early years. A bit of digging led to a collection of oral histories with snow survey pioneers conducted by the Natural Resources Conservation Service (NRCS).[ii] We learned that in 1905 James Church, a professor at the University of Nevada, was the first to bring weather instruments to the West’s mountain tops, establishing a weather observatory on the summit of Mount Rose in Nevada. At first, the goal of this work was just to collect winter temperature readings in order to predict the timing of frost in the valleys. But soon Church was measuring snowpack and revealing important links between forest cover and snow conservation, as well as between snowpack and spring runoff. By 1908, Church had recognized that it was not enough just to measure snow depth, for water content varied considerably. Instead, he began studying and measuring the snow’s life history to understand how much water it held and when that water would be released. By 1910, hydro power companies and state agencies were clamoring for Church’s data, and streamflow forecasting from mountain snowpack was born. 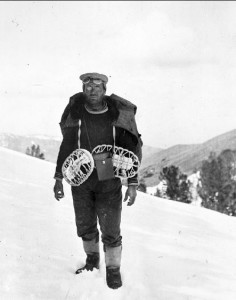 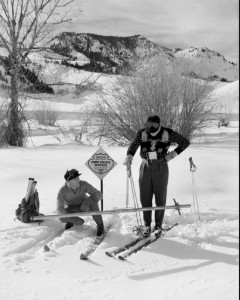 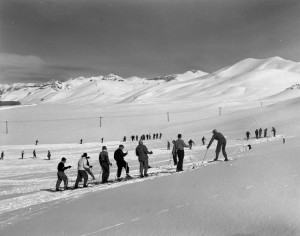 Snow surveys spread across the western U.S. in the 1920s and 1930s and did, in fact, come to the Boise Basin by the mid-1930s. The NRCS’s oral histories and historic photos paint a picture of extremely hard work, of men setting off into the mountains, on skis, with barely a sleeping bag, to travel across, work in, sleep in, and understand, as thoroughly as possible, the snow that keeps the West alive.