My undergraduate education gave me many things, one of which is my dear friend Samantha. We became fast friends, both of us were studious, avid connoisseurs of ice cream (but terrified of the dreaded freshman 15), and a quarter Asian. One of the many perks of our friendship was getting to meet Samantha’s family, including her Baasan, or Japanese grandmother. Samantha’s Baasan is strikingly tall, regal, and garrulous. Put simply, she is unforgettable. While in school, my line of historical inquiry remained state-side, but I cultivated a healthy respect for Japanese culture and history by getting to know Samantha’s family, specifically her Baasan.

As any historian knows, each country has its fair share of blemishes, and Japan is no exception. Last month, Japanese history made waves through the United States media. On April 29, 2015 Prime Minister Shinzo Abe was the first Japanese leader to address a joint meeting of U.S. Congress. The context of the visit was important, as 2015 marks the 70th anniversary of Japan’s defeat in World War II. However, Abe’s skirting of Japan’s war time atrocities cast a shadow over more recent Japanese progress, specifically its post-war revival, alliance with once enemy America, and stability in a volatile region. Chief among Abe’s avoidances are recognition of the Japanese government’s ruthless treatment of neighboring Asian nations and the enslavement of thousands of women, involuntarily driven to work as “comfort women” or sex slaves in wartime brothels.[1]Indeed, Abe and his fellow nationalists have sought to revise Japanese history in more ways than one. Japan’s Education Ministry attempted to coerce publishers of middle-school textbooks to whitewash historical events, specifically ownership of disputed islands and various war crimes. Moreover, in 2014 Abe’s government (unsuccessfully) pressured the United Nations to revise a 1996 human rights report on the Japanese women that were forced into sex slavery.[2] 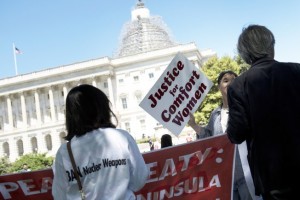 While disheartening, the recent revelations concerning Japan’s past reminded me of the power that history wields. American universities continue to slash history departments, both in terms of funding and positions. Worse yet, some universities, don’t even require students take a history course in order to graduate with a bachelor’s degree. Such actions beg the question: Who will safeguard the past, in the future? Because when it comes down to it, science, technology, engineering, and math majors are not equipped to shine a spotlight on a government attempting to erase the unsavory events of its past. That’s the historian’s role.

Despite the funding cuts and sour attitudes, the past remains vitally important. It is imperative that Abe fully acknowledge Japanese atrocities of WWII, not only for the sake of historical integrity, but for the sake of honesty and healing. Until he does, the duty of keeping the historical facts alive falls upon all of us, a call which I’m certain Samantha’s Baasan will no doubt answer.