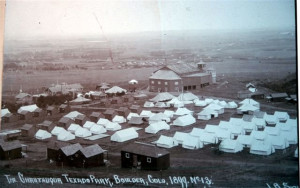 On a recent trip to Boulder, Colorado I had the chance to stay in the Colorado Chautauqua, one of the few Chautauquas left in the U.S., and the only one still operating west of the Mississippi. The nationwide Chautauqua movement of the late 19th and early 20th centuries was characterized by intellectual and cultural retreats for adults that combined education and entertainment, bringing together teachers, speakers, musicians, preachers, entertainers, and more. Tucked at the base of the Flatirons, the Colorado Chautauqua’s current facilities include almost 100 small cabins, a dining hall, a large auditorium, an academic hall, picnic pavilions, and more. Many of these buildings date back to the early 1900s. As such, the site is on the National Register of Historic Places, and the grounds – even the feel of the place – are steeped in history. 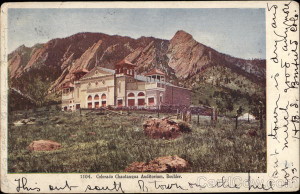 The Colorado Chautauqua – originally the Texas-Colorado Chautauqua – first opened its doors on July 1, 1898 to a crowd of 4,000 people. That summer, Texas teachers and Boulder civic leaders joined together for the first of many cultural and educational retreats, just as similar groups joined together across the country. Lectures, films, classes in everything from cello to chemistry to Greek, performances by the resident orchestra, horseback rides and hikes, and mountain railway excursions could all be enjoyed at the Colorado Chautauqua. Especially for women, who were otherwise denied these sorts of pursuits, the retreat to Boulder for the summer provided a rich intellectual, cultural, and recreational experience. 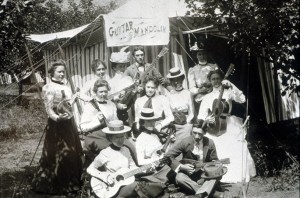 Despite a few financially challenging periods in the 1930s and 1970s, the spirit of the Colorado Chautauqua remains strong today, thanks in large part to a revitalization in the late 20th century focused around jazz, bluegrass, and classical music. Most interesting for us at SHRA, the Colorado Chautauqua holds an extensive archival collection dating back to the 1898 and consisting of historic photos, posters, and printed materials that hold the collective stories of this historic place.[i]

[i] “Chatauqua History,” About Us, Chautauqua; “Colorado Chautauqua,” Wikipedia