8/12/15 — The National Archives: Making and Keeping History, Part One

As the newest member of the SHRA research team, I was pleasantly surprised to learn that my first day in the office would not take place in the office at all; instead, on my first day of work, I would be traveling to Washington, D.C. with the rest of the SHRA team for a week-long research trip. Although I had done archival research both as a graduate student and SHRA intern, I had limited experience researching at a National Archives facility and I had never before been to Archives II in College Park, Maryland. Needless to say, I was eager to have the opportunity to do in-depth research at a National Archives branch and relished starting my career as a historical researcher with SHRA.

After a lengthy first day of travel, which provided me with ample time to review the background information regarding this trip’s research questions, we arrived in Washington, D.C. As I settled in for the evening, I reread the NARA website regarding research protocol at Archives II, and the following morning, after obtaining my first “researcher card,” I headed into the reading room feeling a bit overwhelmed but also determined not to break any of the rules and to learn the ropes of National Archive research. 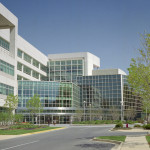 As I sat in the Archives II reading room waiting for the facility’s staff to pull my first cart of boxes, I took in my surroundings and began to wonder about the role that the National Archives has played in U.S. history. I knew the collection that we were planning on researching in contained documents which dated back to the 1910s, but I wondered how long had the National Archives been in existence? What was the history of the agency responsible for maintaining the records of every other federal government agency in the country? Were the records that the National Archives held older than the agency holding them? What role have historians played in the creation and continued existence of this agency? How did the agency grow into the entity that it is today with such a streamlined process aimed at helping all visitors, not just American citizens, in their research? Later that evening, with those questions in mind, I began my investigation into the history of this essential government agency. 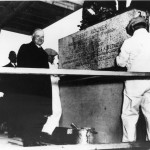 I was very surprised to learn that The National Archives has only been in existence since 1934 when President Herbert Hoover advocated for its creation. He saw the National Archives as “a repository for documents in which elite as well as mundane history was recorded.”[1] Despite the fact that the federal government, from its earliest existence, was acutely aware of the need to protect and keep records, little effort was made to create an agency to manage the records of the young nation. It wasn’t until 1903 that the federal government took the first steps towards establishing a record keeping agency by purchasing land for the future National Archives I building in Washington, D.C.[2] However, this lot, which was located exactly halfway between the Capitol and the White House on Pennsylvania Avenue in Washington D.C., remained unchanged for decades. It took the United States entering World War I and the American Legion’s concern about preserving war-related documents that finally pushed Congress to act and appropriate funding for an archives facility.

The fact that this agency has such a relatively short bureaucratic history and yet has been able to take possession of nearly all of the government’s written, photographic, and cartographic records, many of which pre-date the agency itself, and organize them for researchers is rather amazing. This reality can be attributed to both archivists and historians, who the legislation mandated hiring to create organizational systems for these various records.[1] One of the first tasks that these early archivist-historians tackled was to create the agency’s basic collection unit (the record group) and to create finding aids for these collections, the first of which was completed within three years of the agency’s creation. Today, researchers continue to benefit from the earliest efforts of these historians.

With the knowledge of the history and important mission of the National Archives I felt humbled, honored, and if possible, even more excited by the prospect of spending an entire week looking through the “mundane and elite” historic records held at Archives II. However, I quickly realized just how complex the process of archival research can be, not only in terms of looking through the boxes of records, but in simply finding the right boxes to look through. I realized that it will take time and practice to have a thorough understanding of the various collections and finding aids, and to be able to quickly and accurately fill out pull slips. However, despite these initial challenges, and thanks in large part to the guidance of my co-worker, Stephanie, the trip was quite successful and I was surprised to find how quickly the week had passed.

I anticipated Friday, the last day of our trip, to be rather hectic because of the large number of boxes we still needed to look through. Suffice to say, I was not only startled but somewhat frustrated when the fire alarm went off promptly at 9:00am. Immediately, the facility’s security guards shepherded all researchers and staff outside and along a long paved walkway towards the emergency meeting place. While all of this was done in a calm and orderly fashion, it was at this point that I realized just how big the Archives II building actually is, and I came to appreciate the sheer size and magnitude of records which I estimated the building must hold. I then immediately wondered, what would happen if a fire actually broke out at a National Archives facility? What would that mean for our nation’s historic records, and had such events happened before?

To learn the answers to these questions and to find out about the outcome of my emergency evacuation at Archives II in College Park, be sure to check back for the second iteration in this blog series on the history of the National Archives.