8/19/15 – The Boulder-White Clouds: the Long History of Wilderness in Central Idaho

Idaho is renowned for its recreational opportunities and magnificent ruggedness. The solitude provided by its rivers and mountains are unmatched. Thus, President Obama’s August 7, 2015 signing of Idaho’s Sawtooth Recreation Area and Jerry Peak Wilderness Additions Act is a significant event in environmental and Idaho history, particularly when viewed as the capstone of a long and controversial history of the region dating back more than 100 years. The legislation signed earlier this month created three separate Wilderness Areas totaling 275,000 acres in the Sawtooth and Challis National Forests: the Hemingway-Boulders Wilderness Area, the White Clouds Wilderness Area, and the Jim McClure-Jerry Peak Wilderness Area. The new designation deserves particular recognition not only because this magnificent part of Idaho’s central mountains is now protected, but because it represents a compromise and the culmination of a deep-seated controversy between multiple stakeholders surrounding the value and use of Idaho’s central mountains.

The Sawtooth and White Cloud mountain ranges lie on either side of the Stanley Basin, a 30-mile long valley bisected today by Highway 75. This spectacular drive connects the tiny resort town of Ketchum/Sun Valley to the hardscrabble historic mining town of Stanley. On the west side of the highway rise the jagged peaks of the Sawtooth range, which features a meeting of the Idaho and Sawtooth batholiths. The east side of the road treats the traveler to a view of the more haunting White Cloud range, characterized by contrasting images of dark shadows and stark white rocks. Down the middle of the valley, the Salmon River cuts a gentle path through the bucolic ranching landscape. In the 19teens, women belonging to various clubs (loosely affiliated as the Idaho State Federal of Women’s Clubs) recognized the unique gift of this place – the Sawtooths in particular – and aimed to create Idaho’s first National Park there. Their efforts were stymied, however, in the face of the U.S. Forest Service who wanted to keep control of the landscape itself.[1] 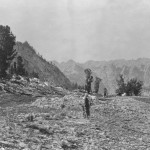 Sawtooth Forest Supervisor Dana Parkinson, wife Lucy Parkinson and companions have made a camp just visible in trees at center-right of image. Two women, one of which is probably Lucy Parkinson, and several horses are visible in foreground. 1910s. Courtesy Forest History Society.

The 1920s was an era of increasing recreation demand, thanks to the automobile and its facilitation of easier access. The Forest Service was the first federal agency to propose wilderness areas, thanks to Aldo Leopold, in 1924, and road-less recreation was at the center of its plans.[2] Thus, while the Forest Service recognized the limited commercial value of the Sawtooths’ natural resources, it also recognized the very early seeds of a recreation movement and wanted these mountains to showcase as the crown jewel of its management prowess. Its 1926 policy plan “declared large sections of the Sawtooths to be ‘primarily valuable for recreation and game purposes,’” and “sought to balance commodity production …with scenic preservation and recreation.”[3] By embracing the traditional missions of both the Forest Service (utilitarian) and the Park Service (scenic recreation), the policy statement more or less eliminated the chance of a National Park in the Sawtooths.

Nevertheless, the tradition of citizen demand carried through many decades to the law that President Barack Obama signed two weeks ago A wilderness designation for the Boulder White Clouds – and Idahoans’ views of the pros and cons – go back almost as far as the Wilderness Act itself, signed in 1964, many years after Leopold first proposed the idea. When President Lyndon B. Johnson signed the bill into law, it offered the highest level of protection for the nation’s most pristine lands and waters. The bill itself was a compromise, having gone through dozens of iterations and hearings before finally becoming law.

Within just a few years of its passage, however, the prospect of a large open pit mining operation near the base of Castle Peak first threatened the natural beauty of the White Cloud Mountains. This prospective mining operation ignited a fierce controversy between conservationists and those interested in the benefits of economic development, a debate that eventually reached a national audience and involved many of Idaho’s politicians. Then Governor Don Samuelson and Representative James (Jim) McClure both supported the mining operation, while Senators Frank Church and Len Jordan, together with Cecil Andrus, (later elected Governor of Idaho in part because of his stance on this issue) opposed the operation.[4] The mining threat led to additional protections for the area in the form of the 1972 designation of the Sawtooth National Recreation Area, a managerial overlay that was not as restrictive as wilderness would have been but nonetheless prevented the development of large-scale mining operations in the White Clouds Mountains.[5] 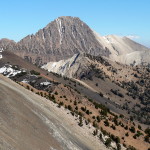 The designation of the Sawtooth National Recreation Area protected the area from overt development yet allowed for various recreational activities including the use of motorized vehicles, uses disallowed by a wilderness overlay. As a result, various politicians, including Cecil Andrus, continued to fight for stronger protections. Throughout the late 1970s, as Idaho advocated for additional wilderness designations, including the successful 1980 designation of what is known today as the Frank Church River of No Return Wilderness Area,  various Idahoans continued to push for more protection for the Boulder-White Cloud Mountains.[6] However, these efforts continued without any tangible results for decades.

By the early 2000s, Idaho politicians were once again urging Congress to take action to designate the Boulder-White Cloud Mountains a Wilderness Area. In 2004, Idaho Congressman Mike Simpson introduced CIEDRA, The Central Idaho Economic Development and Recreation Act, a bill which represented a compromise from the start. This piece of legislation attempted to address the concerns of the stakeholders who had been involved in this controversy since the 1970s. However, despite these efforts, Congress was unable to pass the bill, despite it being redrafted and reintroduced over six times.[7] By 2011, conservationists, including the Idaho Conservation League and The Wilderness Society, began advocating for these lands to be designated as a National Monument, which, despite being a lesser and more easily attainable designation, faced continued controversy from opposing stakeholders, namely those concerned about motorized vehicle use.[8] 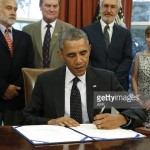 Decades in the making, the legislation truly represents compromise, with the final version appeasing most, if not all, stakeholders. Because of the boundaries of the various wilderness areas, motorized vehicle and mountain bike use will continue to be permitted along many of the region’s most popular and existing, trails, many of which lay outside of these newly designated wilderness areas. For the majority of Idahoans, this designation has been a long time coming and while a few stakeholders consider the designation to be “bittersweet,” most people involved feel proud of the work that they accomplished, not only because their efforts will be felt by both current and future generations of Idaho recreationalists, but also because their efforts have concluded at least this chapter of Idaho land controversies.[9]

[2] For a full treatment of the relationship between cars and the early ideas of wilderness, see Paul S. Sutter, Driven Wild: How the Fight Against Automobiles Launched the Modern Wilderness Movement, (Seattle: University of Washington Press), 2002.