The SHRA team was recently in Tulsa, Oklahoma, the state’s second largest city. As I was researching dinner options and looking at a city map, I noticed a street called “John Hope Franklin” Drive. The street name instantly took me back to my 1994 graduate seminar with Professor Carl Harris at U.C. Santa Barbara, and before I knew it, I was reliving those early moments of passion for history. In Harris’s class, we discussed the historiography of race relations in the United States, and I read Franklin’s most famous book, From Slavery to Freedom: A History of (American Negroes) African Americans, alongside many, many others during that 10-week course. I ultimately chose to specialize in a different field of history, but race relations always held a particular fascination for me. 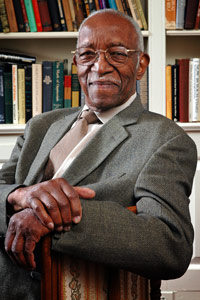 Race relations in this country have become a hot button issue again in the past few years, as clashes between white police and African American citizens have become far too common. So what does the naming of a street after John Hope Franklin say about Tulsa, and its own legacy of race relations? How far can such overtures go toward alleviating the painful historical past?

Born in 1915 in Oklahoma, John Hope Franklin was unique for many reasons. His early experience with racism came at age 6, when his father’s law practice was burned down by white mobs in the infamous 1921 Tulsa race riots. 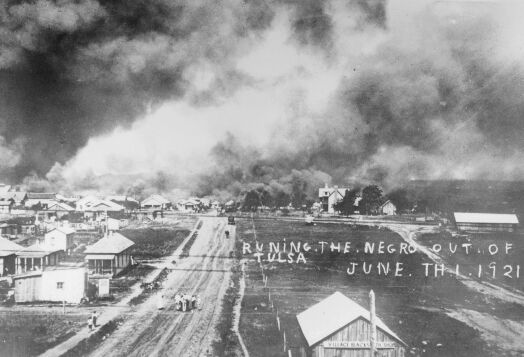 He was no doubt an African American man who faced the expected prejudice and racism of his time. Yet he attended Harvard, where he earned a Ph.D. in History. His first book, noted above, was published in 1947. Early reviews were unflattering, such as one that disparagingly characterized the book as “written by Negroes for a Negro audience,” and another that criticized for “overemphasizing” the “Negro’s role in American history”[1] and the positive aspects of African American life. Yet it was precisely those attributes that ultimately made the book so astounding to the historical profession. By being one of the first scholars to address more than just the victimization of African Americans and further, to give them agency, Dr. Franklin changed the way historians thought and wrote about this fraught aspect of American life, altering the academic discussion of race relations forever. In addition to his illustrious academic career, Dr. Franklin was a civil rights activist: he conducted research for Thurgood Marshall during the Brown v. Board of Education case and marched with Martin Luther King, Jr. in Alabama. He taught at many esteemed traditionally African American universities, such as Howard, as well as other famous schools, including Duke. His scholarship changed the way the profession thought about the role of black Americans in our nation’s history. A Tulsa street bearing his name may not erase the history of American racism, but it will surely help keep his memory and positive legacy alive. Being reminded of his name and his work by the mundane act of driving down a street is perhaps a subtle but powerful reminder of the significance of his life.